Accounting for half of the world's forests, tropical forests are under severe threat. In 2019, the equivalent of a football stadium is destroyed every two seconds. TropiSCO aims to map deforested areas in near-real time and publish the information so that local actors can intervene, alert public opinion and count the areas lost.

The objective of the TropiSCO project is to monitor tropical deforestation using radar images from the Sentinel-1 satellite on three continents (Africa, South-East Asia, South America) and then on a global scale.

This data will have many uses, such as combating illegal logging and mining, illegal agricultural crops and wildlife trafficking, as well as providing easily usable data and statistics.

See the main page of the project TropiSCO Amazonia

The map shown below provides clear hints of the spatial and temporal distribution of forest losses. Note that the map was thoroughly validated in Mermoz et al. (2021). The estimated user accuracy of the forest loss map was 0.95 for forest disturbances and 0.99 for intact forest, and the estimated producer’s accuracy was 0.90 for forest disturbances and 0.99 for intact forest, with a minimum mapping unit of 0.1 ha. These results highlight the fact that the method provides not only quick alerts but also reliable detections that can be used to calculate weekly, monthly, or annual forest loss statistics at a national scale. 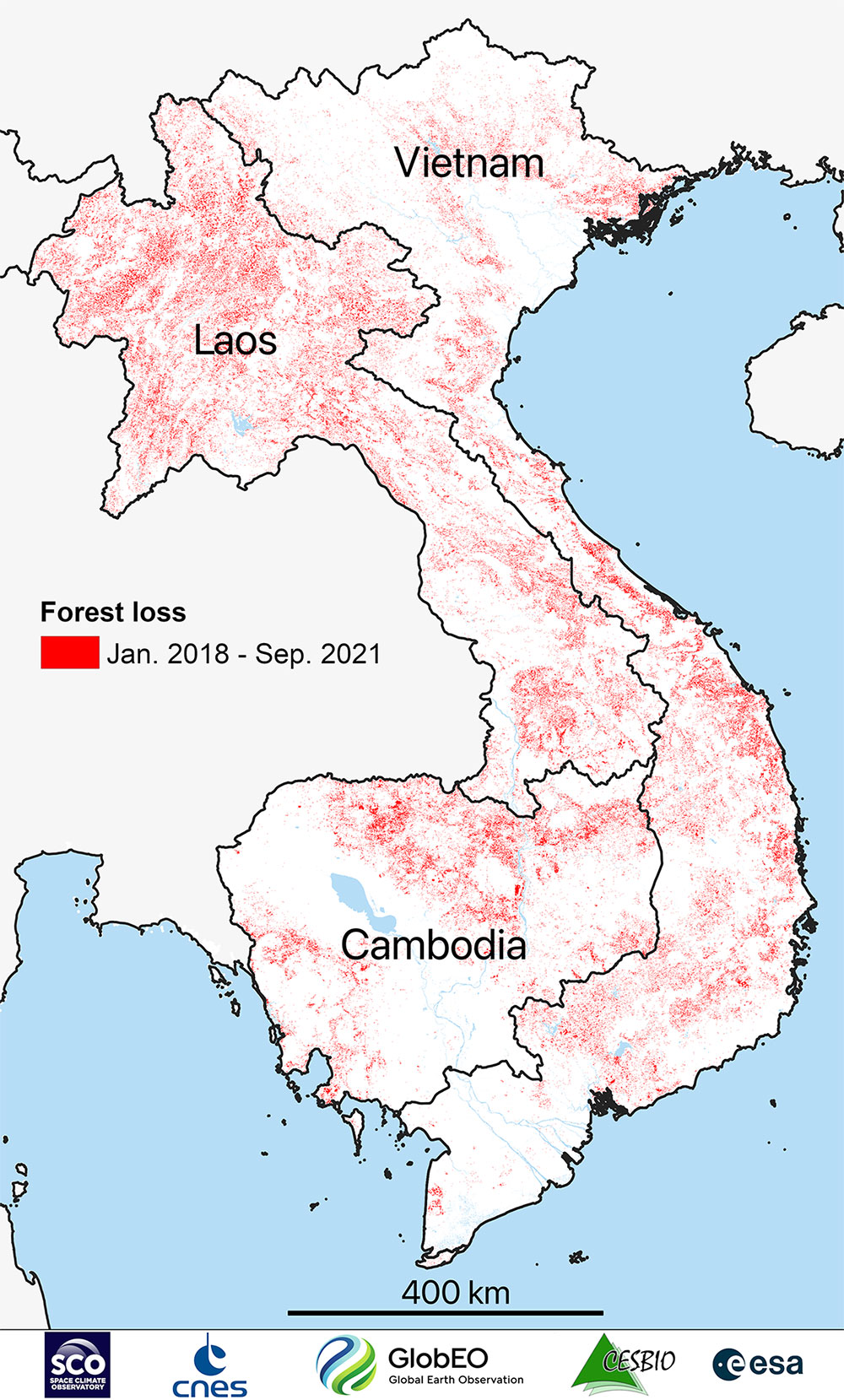 Spatial distribution of deforestation. For example, the map highlights the fact that forest losses are prevalent in the three countries and occur everywhere. The map also demonstrates the striking difference between the low forest loss rates in Vietnam (northern Vietnam was severely affected in the last few decades and its more efforts are being made to preserve its forests now) and the high forest losses currently happening in northern Laos. (Ingalls et al., 2018).

Specific areas of the whole forest loss map are shown in the figure below. Northern Laos recently experienced the largest deforestation rates as compared with the rest of Laos, Cambodia, and Vietnam. In northwestern Laos, forest was cut mostly for commodities, as seen in subfigure 1 and is also experiencing a rubber boom (Xiao et al., 2020). Subfigure 3 shows infrastructure construction at the border between north and central Laos, whereas Subfigure 5, in central Laos, shows cashew plantations (Hurno et al., 2018). Compared to the plantations located in northern Laos, the cashew plantations in the center of Laos are much more numerous and far smaller. Pulp tree, sugarcane, coffee, and rubber plantations can be found in southern Laos (Subfigure 7). In this region, land concessions are mostly conceded to Vietnamese investors in rubber. Figure 5.8 shows an area where pulp trees have been planted en masse, which is the center of a huge area of plantations that extends roughly from 13°N to 18°N; the forest loss in this area corresponds mostly to plantation logging. Logging roads are visible in Subfigure 11, whereas large areas of timber and particularly rubber plantations can be seen in Subfigures 9 and 11–13. Although southwestern Cambodia has been partially preserved thus far, as in the Cardamom mountains that constitute one of the last remaining natural forests in southeast Asia, Subfigure 10 shows that forest loss occurs in this region. 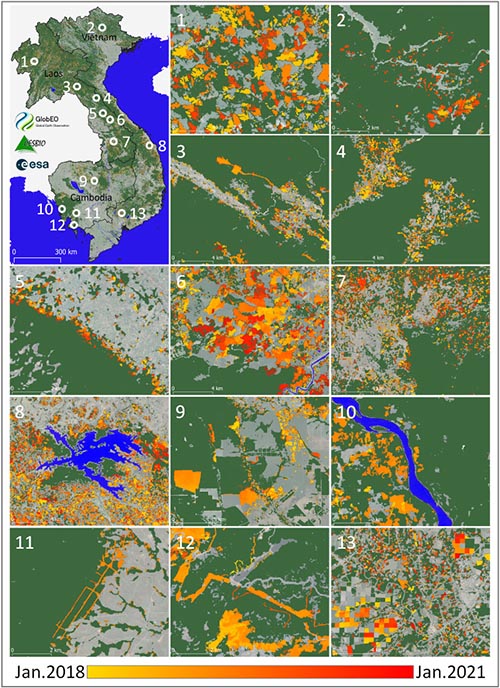 Mapping deforestation in Vietnam, Laos and Cambodia based on Sentinel-1 data. © GlobEO 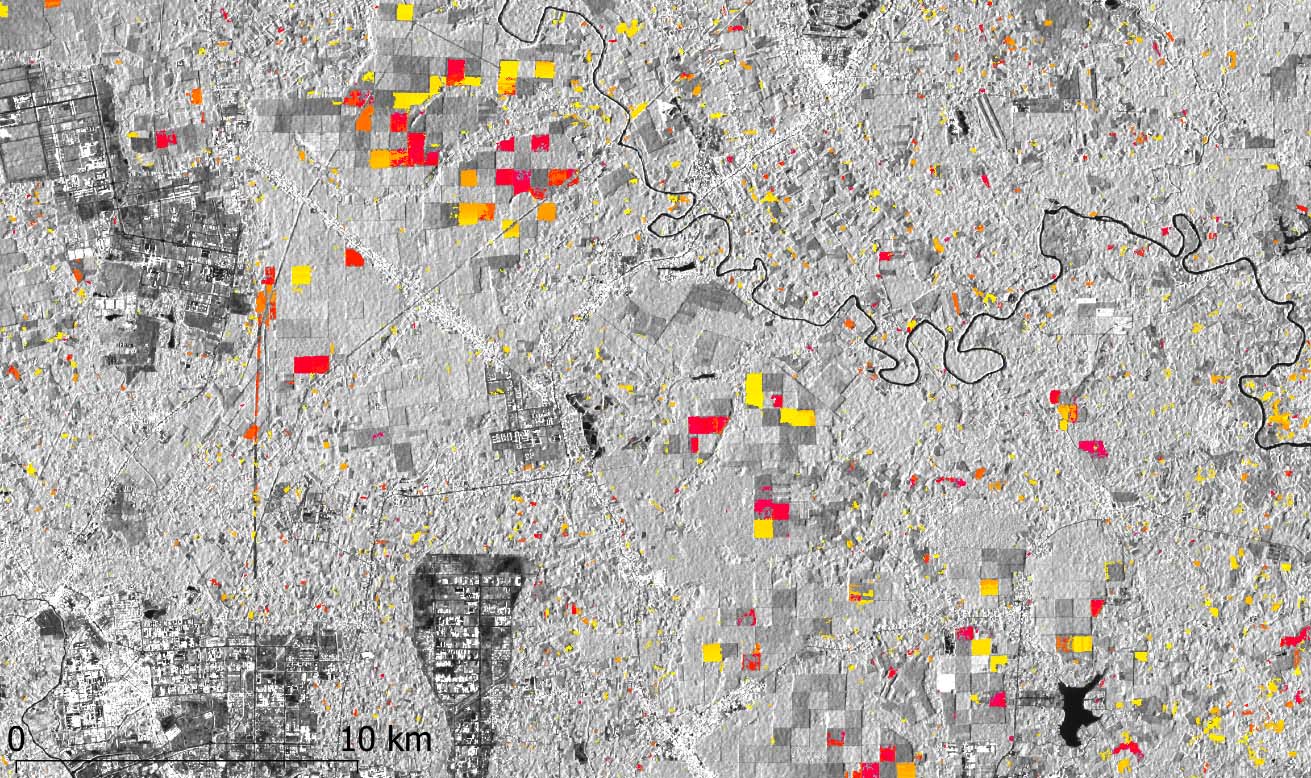