Published on 05/05/2021
Our future depends on our immediate reaction and on the actions of our future citizens, our children. In order to make them aware of climate change and the importance of changing our lifestyles, the EducSCO project addresses those who form them day after day: the teachers. Let's get to know this project better through the first training session.

Using the voice of the teachers is not new. Like other governments, France has integrated climate change and sustainable development into the school curriculum, a complex task for which the SCO can support the educational community. To this end, the EducSCO project is organized to provide teachers with the information and tools they need to raise their students' awareness and stimulate their thinking to find solutions for adaptation. The interest is therefore twofold, consisting on the one hand in clearly explaining to children, with scientific demonstrations, this changing world and, on the other hand, in convincing them that we can adapt via acceptable actions in which, tomorrow, they will be the direct actors.

Be aware while remaining positive

After a first intervention of 1h30 at the end of 2020 with school teachers in Aquitaine, the team has deployed its device. Organized by the Maison pour la Science Midi-Pyrénées in partnership with the CNES Eolab, Météo-France and the Academy of Toulouse, the first "official" EducSCO session brought together nearly 20 secondary school teachers over two half days.

On April 6, 2021, participants attended a remarkable presentation by Météo-France to explain climate change, the physical basis of the phenomena concerned (terrestrial radiation balance, greenhouse effect, etc.), the impacts (melting ice, heat waves, disruption of the water cycle, etc.), but also the changes in our lifestyles since the industrial revolution that have undoubtedly led to this global warming. "It's a hard message to receive: human activities are directly responsible, the impacts are growing and the only solution involves a radical rethinking of our lifestyles. At the end of this first half-day session, the teachers expressed all the pedagogical difficulties of expressing and getting students to accept such an observation," says Vincent Lonjou, in charge of the SCO at Eolab. This is where EducSCO comes into its own: yes, the problem is as big as the task is heavy, but by combining political, individual and collective actions, we can change the trajectory and make it acceptable. For this, new technologies are valuable tools for identifying and implementing adaptation scenarios.

"Spatial and climate change are great topics for interdisciplinarity, including developing critical thinking and analytical skills. »

In fact, three weeks later, on April 27, the organizers did everything they could to show their audience - which had returned in full - that we can remain positive. To do this, CNES presented all the riches of space data: what are satellites, what are their sensors and how can their data be used to understand the causes and consequences of global warming but also to react. The participating teachers are also invited to make proposals for pedagogical works that they would like to carry out in class, for which the EducSCO team is ready to adapt its tools and materials.

The philosophy of EducSCO is to pose the problem of climate change to students and then to put them in investigation mode so that they can formulate hypotheses for solutions. To accompany teachers and their classes in this direction, EducSCO proposes to use two applications: 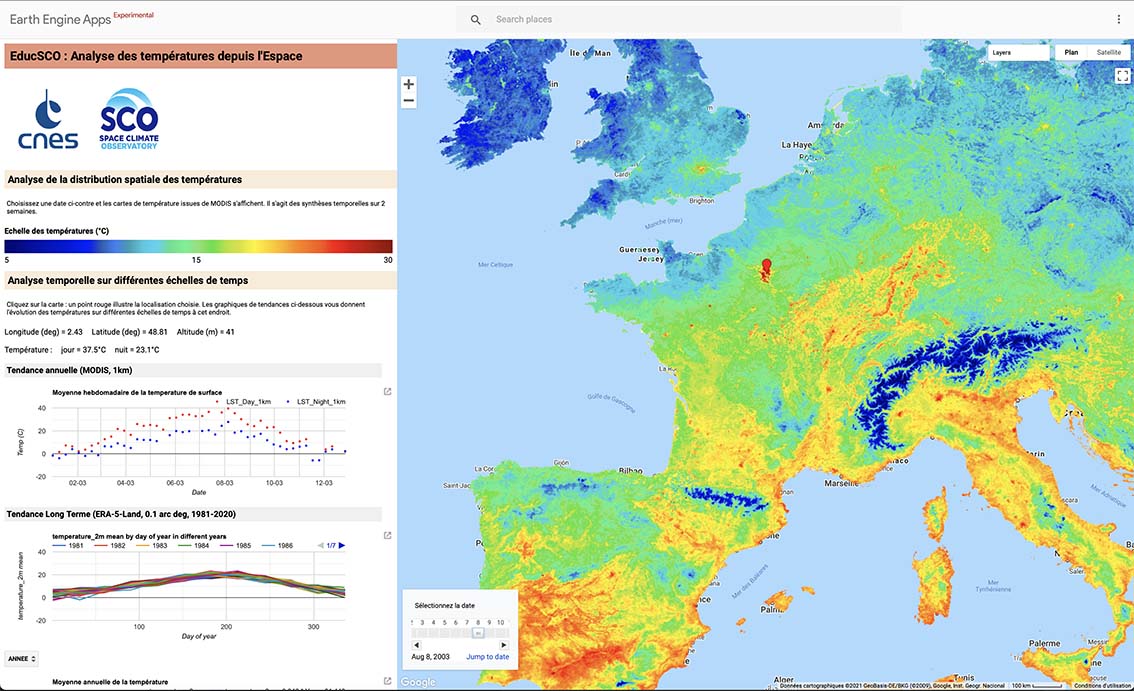 Developed via Google Earth Engine, EducSCO Temperatures invites you to select a position on the map and a date. The map is immediately updated while the left pane displays various information and graphs such as the temporal evolution of the surface temperature on several time scales, from one week to several decades. For this example, the cursor is positioned on Paris during the heat wave of August 2003. © SCO

EO Browser in Teacher mode proposes to explore 12 predefined themes, with the selected places of interest and the chosen visualizations. © EO Browser

Towards a hybrid formula

Because of the health crisis, the training was initially planned as a face-to-face session, but was held remotely, which offers other advantages. The sessions were recorded from start to finish, and the CNES Youth Education Department is in the process of making reusable video clips.

This also gives the organizers the idea of hybridizing the next sessions: a first stage at a distance, even in autonomy, to deliver the theoretical bases and, for those who wish to go further, a second stage of practical work in person. This will be decided according to the results of the survey launched to collect the feelings of the participants to this first training.

The next training session is already scheduled for spring 2022 in the Academy of Toulouse, and there are plans to extend it to the academies of Bordeaux and Brittany. The team is also thinking about how it could intervene with other targets such as higher education, the general public or territorial decision-makers. 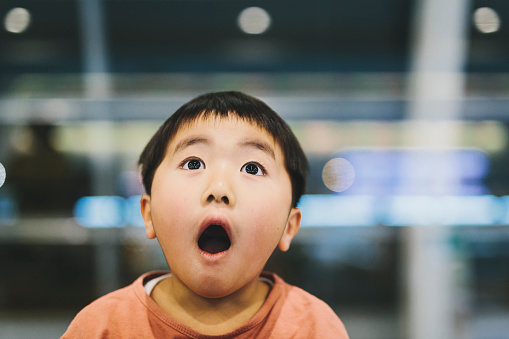 The reality of climate change is a tough message to receive, but space has all the makings of a great way to engage children and motivate their desire to act. © Getty Images

Created in 2019, Eolab, for Earth Observation Laboratory, accompanies the CNES inflection towards applications. With a technical role to accompany the use of space data in the development of applications, it addresses both state services and private companies. Logically, it is one of the referents of the SCO France for the implementation of labeled projects.

Météo-France has a long history of using space data for weather forecasting and for studying climate change. As an international reference service, Météo-France plays a significant role in the main international meteorological cooperation organizations and is actively involved in the SCO France Inter-Organization Committee. 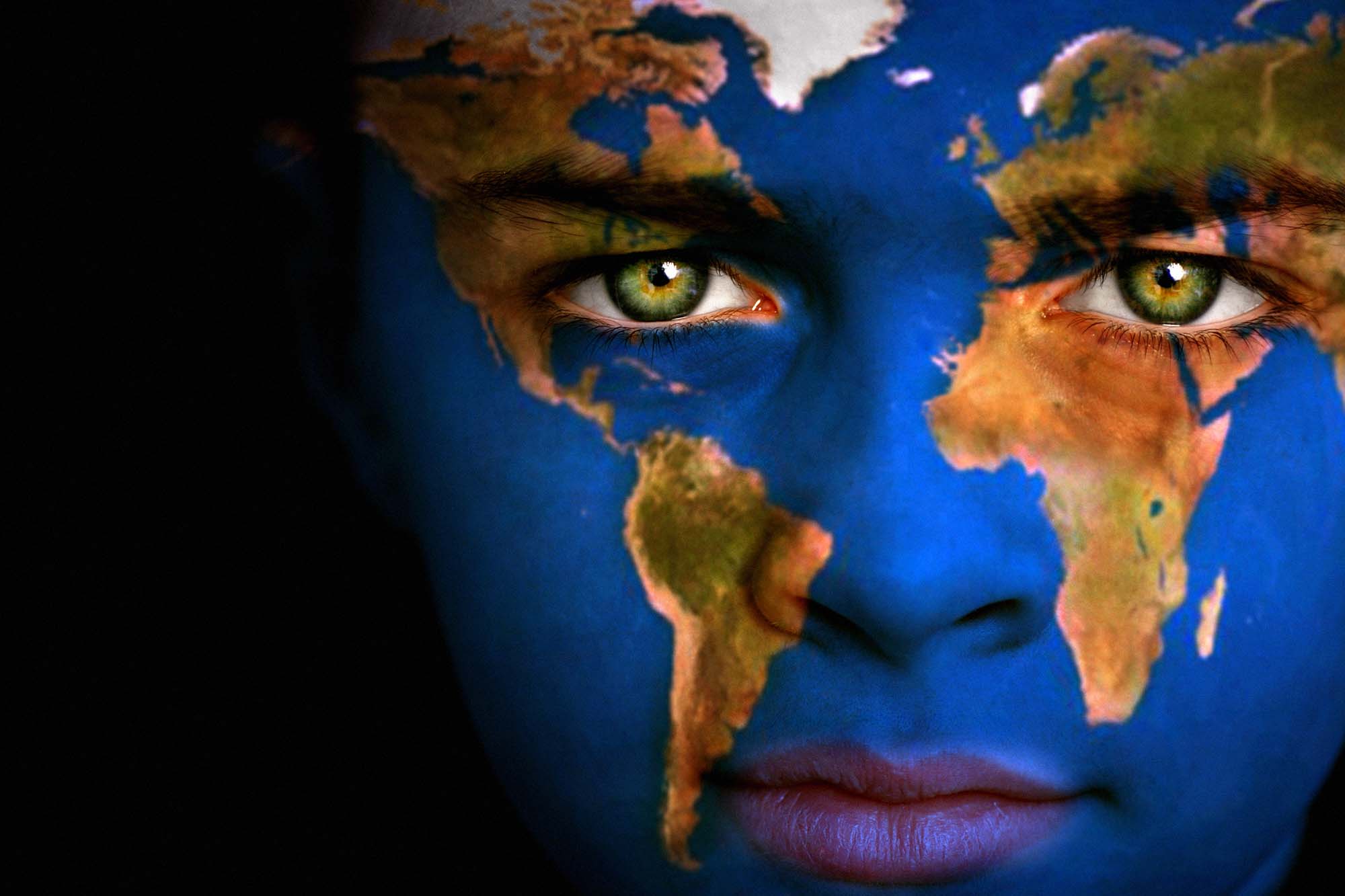