IRRISAT-MAROC aims to implement a system to help optimize irrigation water using satellite data. It is based on two complementary approaches to the estimation of plant water consumption and needs, which will be combined in order to propose results at the scales of the agricultural plot, the irrigated sector and the watershed.

In Morocco, water management is vital because the climatic and hydrological context is extremely fragile. Climate change, through increasingly recurrent extreme events of drought and flooding, and the pressure of growing demand are all factors that make it necessary to plan development and water resources management strategies. Morocco thus began the first water resources planning studies in the 1970s.

Today, the Ministry of Equipment, Transport, Logistics and Water has set up a drinking water supply and irrigation program for the period 2020-2027, with a budget of 115.4 billion dirhams (10.7 billion euros). In addition to increasing the availability of water through the construction of 20 new dams and the desalination of sea water, an important axis of this program concerns the continuation of the modernization of irrigation networks, the collective conversion to localized irrigation as well as the realization of irrigation water saving through the use of New Information Technologies.

In this context, the present project wishes to valorize two research projects: IRRISAT Morocco, initiated by the CRTS in 2015 on the Tadla irrigated perimeter, and SAT'IRR, initiated by the CESBIO in collaboration with the Caddi Ayad University of Marrakech, on the Haouz irrigated perimeter. These 2 projects have already provided local irrigation managers and farmers with a decision support system for water saving and productivity based on Earth observation techniques.

On the irrigated perimeter of Tadla, IRRISAT uses the SEBAL model for four products: estimates of evapotranspiration (actual, potential and reference), biomass, soil moisture, and advice on irrigation water supply. From these products, the system calculates indicators on irrigation water consumption and needs as well as productivity. An online platform makes this information available to users (the Regional office of agricultural development of Tadla ORMVAT, farmers and the Oum Rbaii Water Basin Agency). 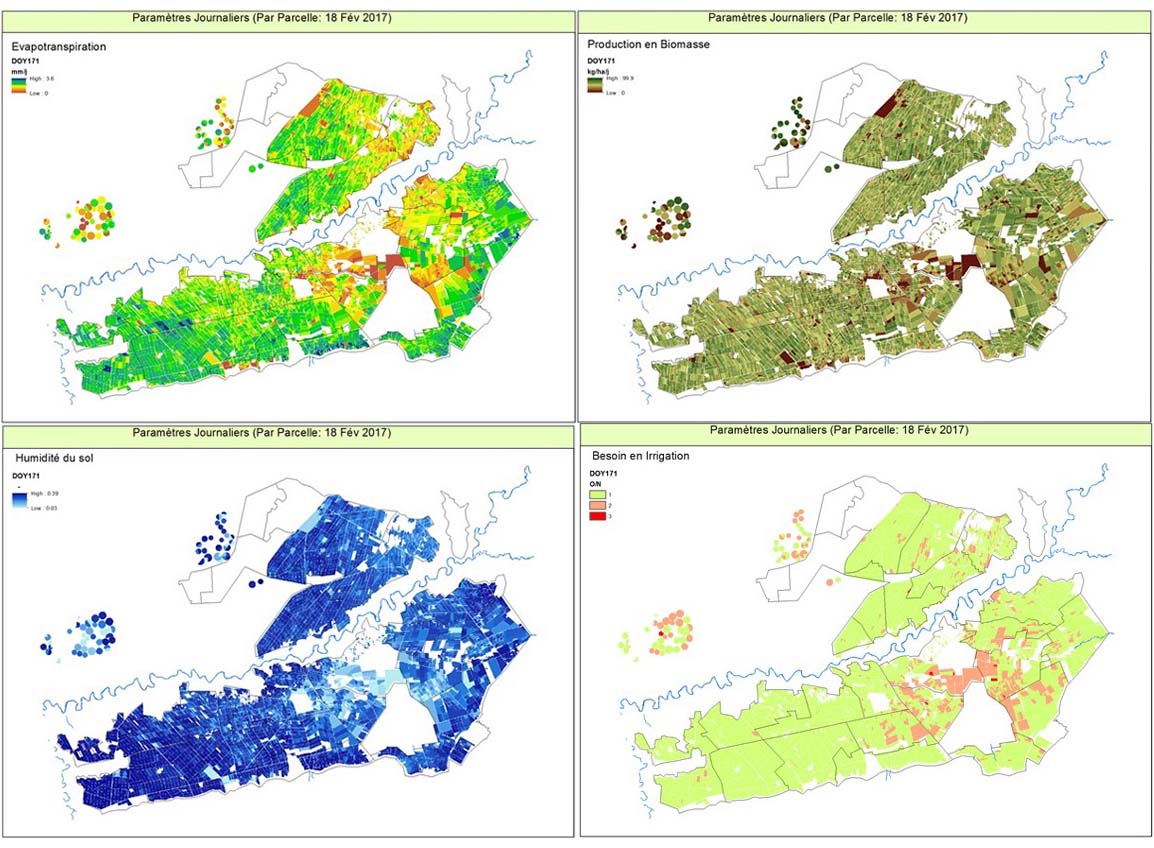 IRRISAT generates its products at a frequency of 16 days at 30m resolution with Landsat data, and at a daily frequency at 100m resolution using PROBA-V and NPP-VIIRS data. © IRRISAT

The SAT'IRR (Satellite for Irrigation Scheduling) methodology uses the FAO method56 to calculate a daily water balance at the user plot scale. Space observations (Sentinel-2, Landsat-8) are used to characterize crop development. A water balance is calculated by comparing the crop development predicted from meteorological and satellite data with the optimal development of these crops. The objective is to predict the date and quantity of the next irrigation with about four days notice. The software, developed from purely open-source resources, has been designed to be computationally and storage efficient so that it can run on a small server. The SAT'IRR platform has already been tested in several countries (Spain, France, Morocco, Tunisia, Lebanon) without any technical or practical problems, and its web interface is aimed at farmers.

Developments proposed in this project

To ensure the sustainability of results and move to an operational phase, consolidation actions are planned to integrate into the IRRISAT Model other satellite data sources, including Sentinel. This will improve the accuracy of the deliverables as well as the frequency of production of indicators, but also to expand the geographical coverage and the spectrum of beneficiaries. Thus we propose the following actions according to the type of beneficiary:

. Establishment of an operational system for producing crop maps based on the use of Sentinel-2 data (if necessary VHR data from the Mohammed VI satellite) and a protocol for collecting training data by ORMVAT. These maps are used to improve the model estimates, particularly with respect to water consumption by crop type and optimal water supply;

. Production of a daily evapotranspiration map at a spatial resolution of 375m, allowing the calculation of monthly and/or annual water balances. This step is carried out on the Chaouia area, in the basin managed by the Bouregreg Hydraulic Basin Agency.

Accordingly, the IRRISAT project plans to carry out the following activities:

The model outputs will be validated against soil moisture and flux measurements (vortex correlation from CRTS in Berrechid and UCA/IRD in the Haouz region). The aggregated irrigation volume at the system level will be compared to the irrigation water consumption from surface resources provided by the ORMVAs.

. Irrigated perimeter development maps, parcel maps, crop maps (to be produced within the framework of this project) 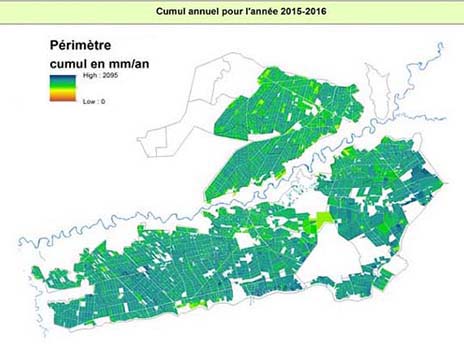