Under the effect of climate change, the aggravation of the natural context and the rapid evolution of the stakes exposed, the risk of forest fires is progressing rapidly in the French department of Aude. ALEOFEU should help identify ways of improving existing tools and models, such as an annually updateable hazard and a better assessment of the hydric state of the vegetation.

The objectives of the project

A place of climatic confluence, from the Mediterranean coast to the Atlantic influence, via the foothills of the Massif Central and the Pyrenees, the French department of Aude is a demonstrator of the progression of the risk of forest fires under the effects of climate change.

The project will explore the potential of satellite data to contribute to the development of hazard definition and risk exposure models during the summer period, and then to the construction of operational tools or demonstrators to assist in the decision-making process for public policies of the State and departmental fire and rescue services (SDIS). These tools concern the prevention and fight against forest fires, by integrating the observed and modelled evolution of climatic and territorial conditions, and by anticipating them as well as possible.

The work carried out within the framework of the SCO Aleofeu will thus make it possible to propose hazard definition models that can be updated at least annually and to improve the assessment of the hydric state of vegetation by specifying and generalising the operational indicators of vegetation drought and hazard indices derived from Earth Observation. 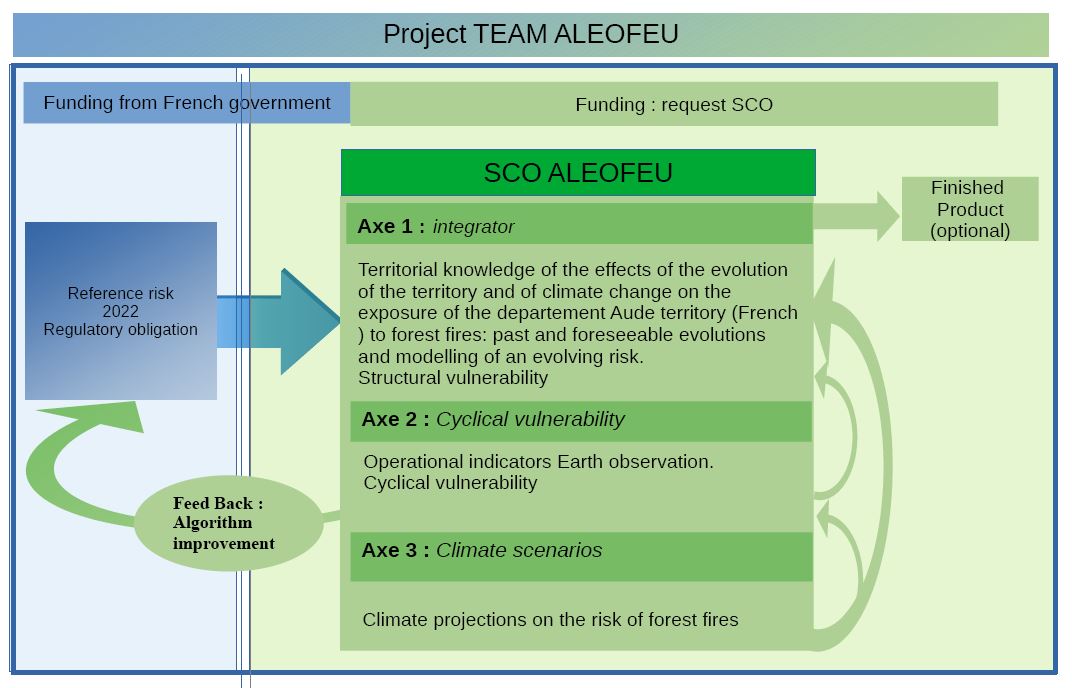 Prerequisite: A departmental study defining the reference forest fire hazard, to be carried out in 2022 in the Aude department, will serve as a working basis for discussions on the modelling of an evolving hazard.

As exposure to fire is largely determined by land-use factors, understanding past developments is a prerequisite for forecasting future developments.

INRAE has developed a probabilistic model of fire occurrence and size (Firelihood), integrating for its construction real fire observation data (Prométhée database) and exploiting the information contained in the fire danger indices (calculated from meteorological data) as well as the local characteristics of land use and human activities.

This model will be applied specifically to the Aude region to analyse recent changes in the occurrence of fires and will integrate, by quantifying them, the components that could potentially explain these changes outside of climate change (progress in prevention and control, agricultural and winegrowing changes, urban expansion, etc.). Satellite data will be integrated into the model according to the thematic fields to be analysed, based on empirical knowledge of the territory by local stakeholders (SDIS, DDTM, ONF) and with the expertise of CNES.

In parallel and from the reference hazard established as a prerequisite, the 2nd objective aims at establishing an evolving hazard.Indeed, the combined effects of the worsening of the territorial context and the effects of climate change are perceptible on small time scales (a few years), making "classic" hazard studies rapidly obsolete, especially in interface sectors (combustible spaces/urbanised areas). This implies determining the input data for hazard modelling which could be updated annually or even biannually.

Using remote sensing, the aim is to study and improve operational vegetation indicators and hazard indices.

In the South of France, the fire behaviour of vegetation is changing under the effect of climate change, making the current indicators insufficient for the definition of fire-fighting strategies, particularly during the summer period, but also in the early and late seasons. In particular, the Forest Weather Index (FWI) is an imperfect reflection of the evolution of fires over the past decades and during the season. Moreover, some local indicators, such as the measurements of vegetation water content (drought index) of the Hydric Network (2 sites per department in the Prométhée zone), do not allow the data to be spatialised on the scale of the territories of a department.

The contributions of remote sensing, following an assessment of the limitations of current indicators and the operational needs for improvements, should make it possible to make decision-making tools more reliable during the extended summer period. A dialogue will be established between the local and zonal levels.

The work will be carried out in two stages:

- elaboration of an audois zoom on the relevance of vegetation drought indicators, prior to the reflections on the evolution of the models;

- use of the Aude region as an experimenter and demonstrator for the INRAe thesis work of Jorge-Castel Clavera "Analysis and modelling of the spatio-temporal dynamics of fires in the Mediterranean region: towards new danger indicators", to be conducted in 2023. These indices will be able to benefit from the indicator proposals of WP1 using Earth observation satellite images.

As part of the update and complement to the studies of the Chatry 2010 report, Météo-France will produce re-analyses and future climate projections of meteorological indices and fire diagnostics on the latest RCP* scenarios, calculated from meteorological variables forced by a dozen different climate models.

Within the ALEOFEU project, Météo-France will produce local variations of the national scale diagnoses, and feedback/accompaniment on these products. Average variables will thus be available, but also an ensemblistic approach in order to better identify the uncertainty of the future hazard.

Similarly, in collaboration with INRAe, different series of meteorological fire indices will be used as inputs to the behavioural model in order to characterise the evolution of the hazard in a more complete manner, going beyond meteorological forcing alone. The aim will be to project the occurrence and size of fires under climate change scenarios, using existing indicators (FWI Forest Weather Index).

Météo-France will also participate in the support, provision and assistance in the use of the various climatic projections of these diagnoses in the form of graphs and departmental maps of the evolution of fire hazard. 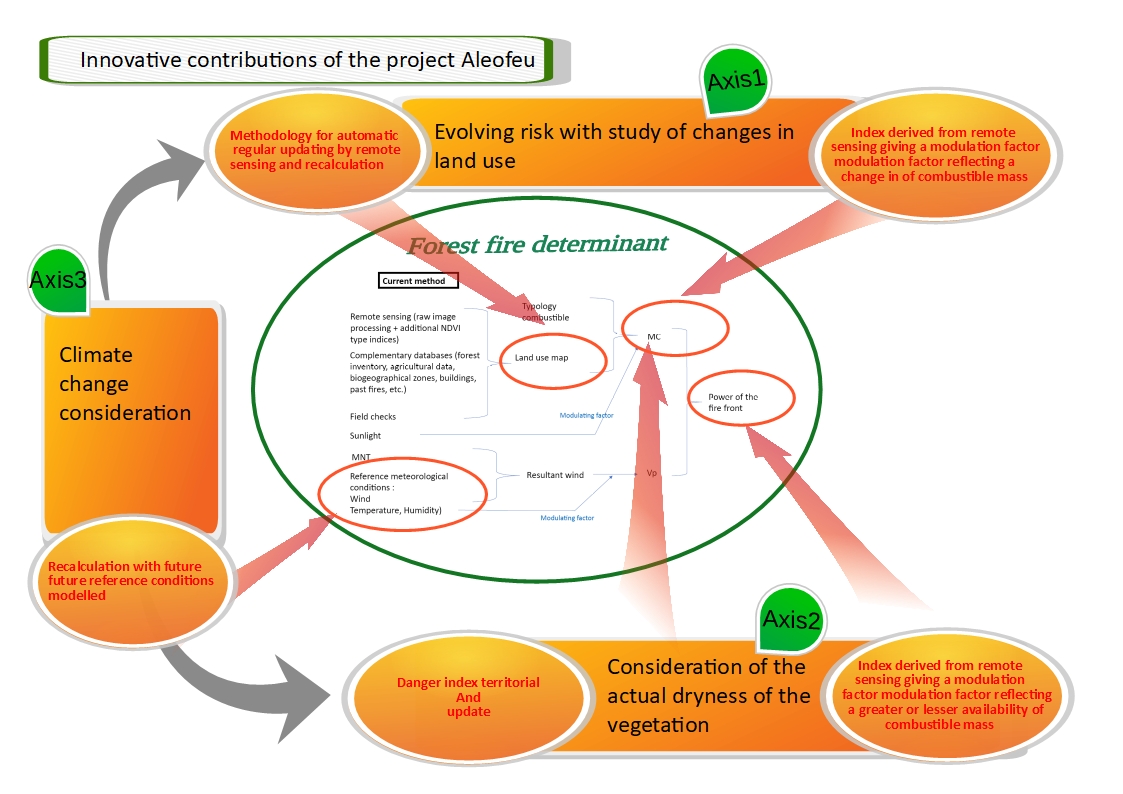 Aude (France) : The project will cover all the DFCI (forest defence against fire) forest areas in the Aude department. In some smaller areas, high spatial resolution imagery (Pléiades) will be used. 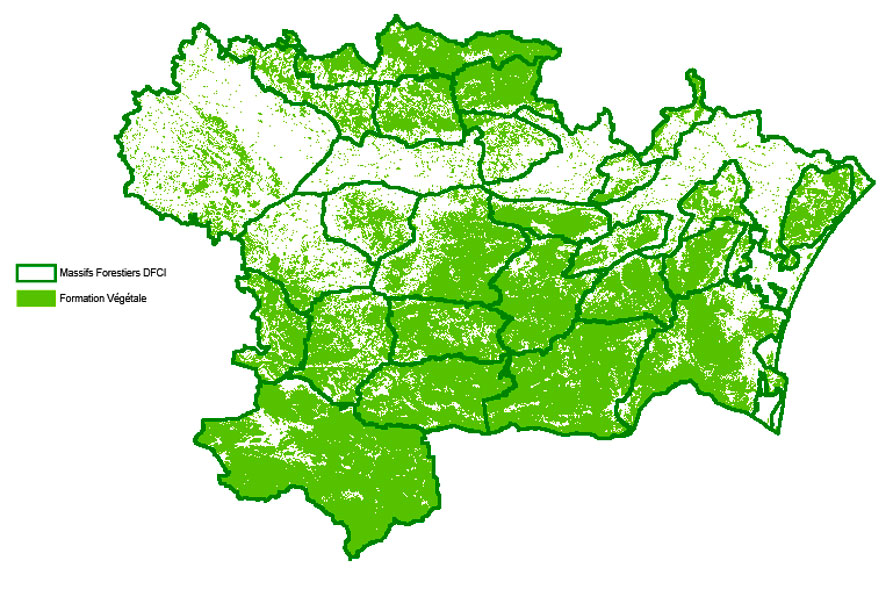 Report of the interministerial mission "climate change and extension of areas susceptible to forest fires: Chatry Report" (in French) 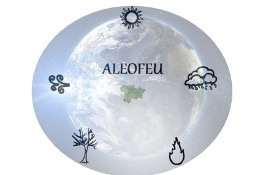 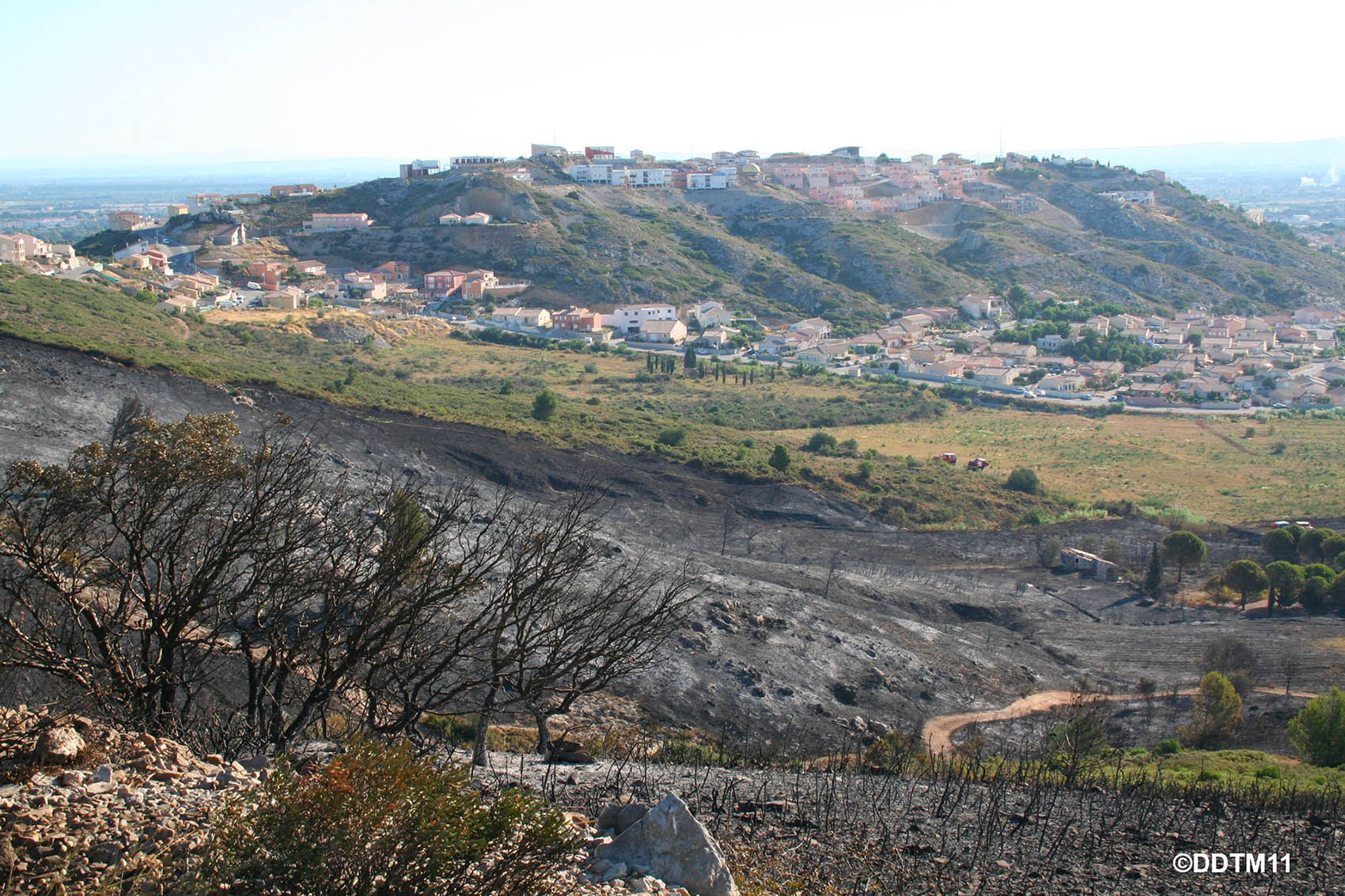 Scrubland fire on the outskirts of the city of Narbonne. © DDTM11