BioEOS proposes to develop observation tools to characterise the spatiotemporal dynamics of coastal biodiversity, map changes and produce operational indicators. The targeted objective is to report on its status and support conservation management. Its first demonstrator is related to the southwestern Indian Ocean region.

With a temporally stabilising effect on ecosystem functions, biodiversity is a natural capital that delivers important services and benefits to humanity ranging from food needs to cultural heritage. However, species are disappearing at a rate 100 to 1000 times higher than the natural rate. In Europe, only 17% of habitats and species and 11% of key ecosystems protected by EU legislation are in a satisfactory state. The challenges are posed at various levels: restoring or maintaining ecosystem functionality, economic viability, integrated management of uses and spatial planning, and taking account of more or less reversible alterations to ecosystems (e.g. climate change) in resource management. Among the main knowledge needs identified (Mongruel et al. 2019), some are related to coastal ecosystems. The latter contain an exceptional biodiversity that gives France a particular responsibility, including vis-à-vis the international community. However, they are considered to be among the most vulnerable because they are the most exposed to anthropogenic pressures, whose impacts are cumulative.

Threatened with collapse by 2050, coral reefs are indeed among the most productive ecosystems, but also among the most threatened. The latest global biodiversity assessment by IPBES (Intergovernmental Science-Policy Platform on Biodiversity and Ecosystem Services) in 2019 indicates that living coral cover has declined by almost 50% since 1870. Despite their vast surface area, estimated at 300,000 km2 across the globe, seagrass beds are among the most poorly understood coastal ecosystems. Assessing their health status over time remains difficult due to very limited monitoring data. Most of the overseas territories are home to sea grass beds showing major signs of degradation (Ifrecor, 2021).

Many biodiversity assessments are based on species inventories and the effort to identify all the species present in a region can be considerable, particularly in the aim is to describe and characterise the distribution of species on a large scale. Based on data acquisition on point or along transect, most approaches can only provide a limited insight into the spatial distribution pattern of biodiversity. From associated changes in species composition to environmental gradients, there is a real need for simple, integrative and operational indicators with the capacity to distinguish the effects of direct and indirect pressures. Satellite imagery can provide some answers. 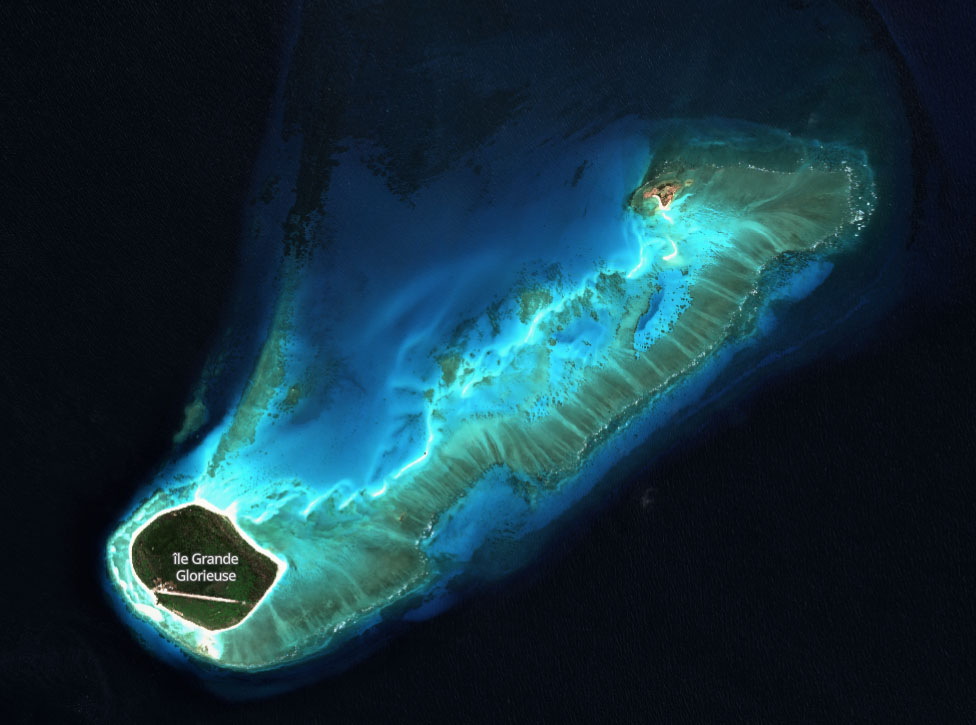 The ambition of BioEOS is to provide generic information that could be used to meet a variety of needs and objectives such as: (i) the assessment of the status of coral reefs, a complex ecosystem with multiple transitions depending on the factors of pressures on it, (ii) the monitoring of the extent and structure of seagrass beds as a bio-indicator of water quality, or (iii) the geomorphological dynamics of the seabed as important information to determine changes in coastal habitats in general.

Because global species extinctions are about 60 times higher in the French overseas departments and territories than in mainland France (Gargominy, 2003), BioEOS is focusing on the South-West Indian Ocean region to set up a coastal biodiversity monitoring demonstrator. In addition to the interest in the vulnerable ecosystems of this region (e.g. coral reefs, mangroves, seagrass beds), such an area also presents a gradient of anthropic pressure, the Eparses islands being considered as free of direct human pressure. For this demonstrator, a set of parameters and proxies (estimation of a variable that cannot be measured directly) of biodiversity ecological status will be extracted from the data collected on the pilot sites. The processing chains will be based mainly on image processing and machine learning algorithms proven by the scientific community. 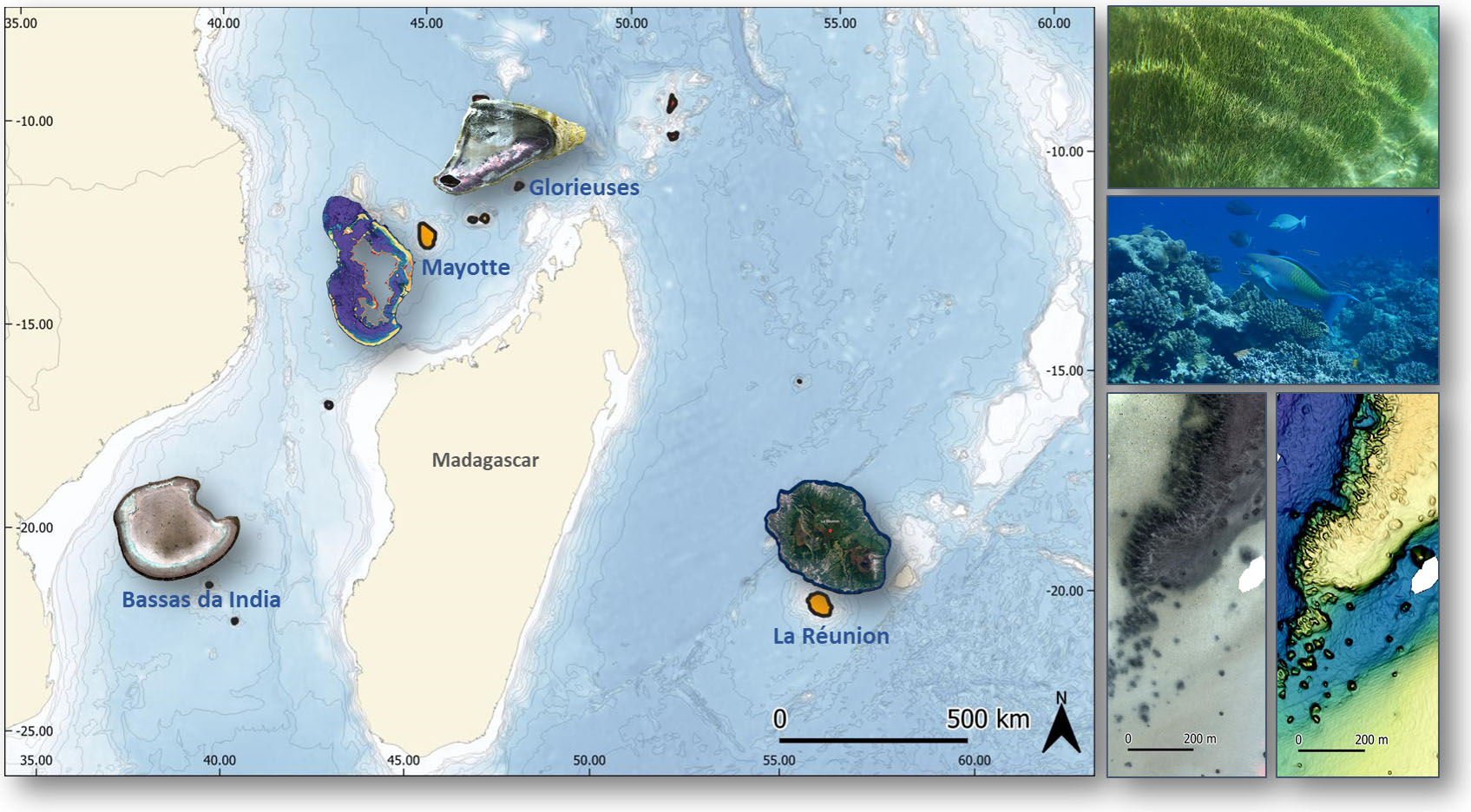 Ultimately, it is the metrics characterising biodiversity spatially that will be sought. The products can be classified into two categories: 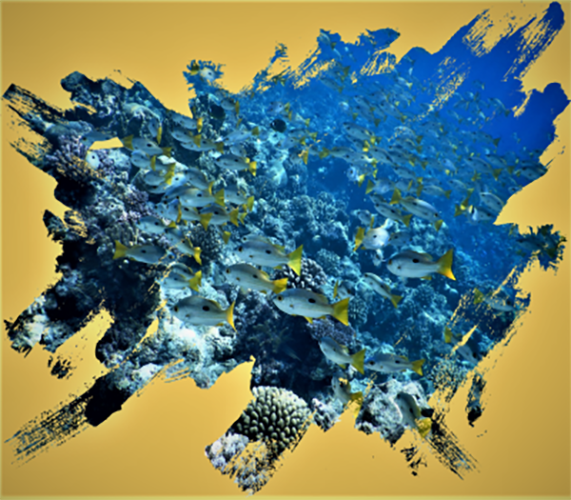