Published on 28/02/2022
In the current context of climate change, how can we monitor the tropical hydrology on which the human, economic, societal and environmental stakes of certain territories depend almost exclusively? We are heading for the Amazon, and in particular French Guyana, the remarkable testing ground for the OpHySE project.

Labelled SCO in March 2021, and although the Covid situation is penalising the collection of user requirements, the OpHyse team, led by Hydro Matters, is progressing on its technical stages in accordance with its schedule. To reach its objective, the project is organised in Work Packages or WPs, whose progress is described below.

Reminder of the objective

The OpHySE (Operational Hydrology from Space and modEls) project, which is being tested in French Guiana, aims to set up a platform for real-time satellite monitoring of the state of rivers and to help with navigability in a context of climate change. State and local services will thus be able to analyse in real time the risks linked to an excess or a lack of water in rivers, and consequently to plan possible actions or movements.

Focus on the hydrological network in French Guiana

Given the Amazonian environment, which is not very conducive to the installation of an in situ monitoring network, and the need to integrate hydrological data from neighbouring countries, the satellite solution provided by OpHySE is a major challenge.

After exchanges with the DGTM (General Directorate of Territories and the Sea), a large quantity of in-situ data (flows and heights) was recovered for the Maroni but also for the smaller coastal basins. Concerning the water level by altimetry, it is still necessary to make an exhaustive diagnosis of the existing and to increase the current coverage. 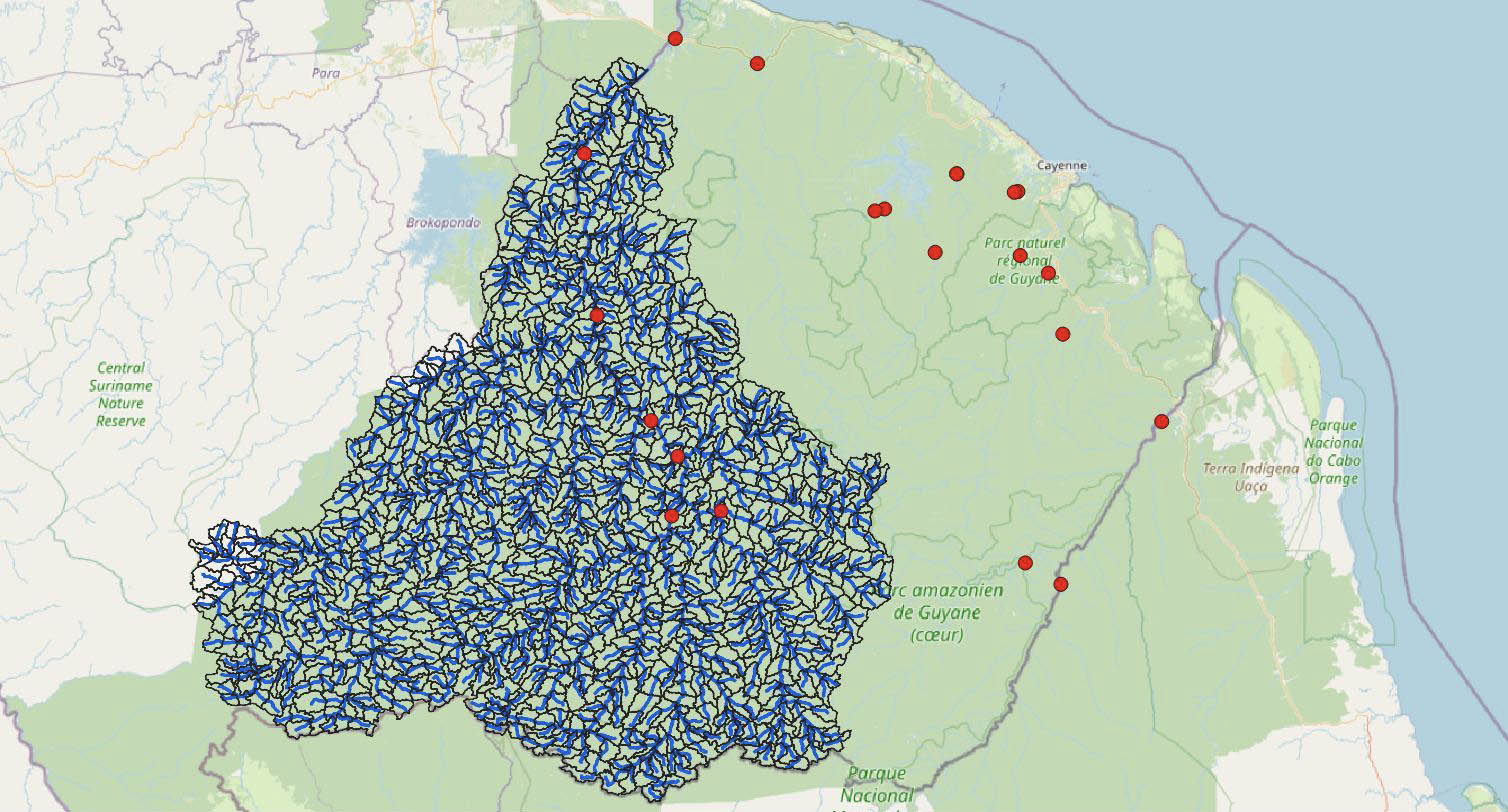 Maroni catchment area and location of in situ stations (red dots) that have already collected long series of height and flow. © Hydro Matters

This involves modelling the flow of large coastal basins, in partnership with the Progysat project. The latter is in charge of the pre-processing of data on the Oyapoque, allowing Hydro Matters, the OpHySE pilot, to concentrate on the Maroni and the coastal basins. Facilitated by the flow series collected in situ, the verification of the model calibration on the Maroni is underway.

The objective of this stage is to establish, thanks to the model of WP2, the rating curve - i.e. the relationship between the water level and the flow - of the Guyanese rivers. The algorithms have already been developed and are ready to launch this stage at the end of WP1 and WP2.

Interviews with end-users will help define the expected indicators.

Discussions are planned around a presentation of the existing Niger platform co-developed by several project actors in order to define the one that will be proposed in French Guyana, according to the needs and means of the DGTM.

Complementarity will be encouraged with the bulletin produced by Bio-Plateaux, a project led by the International Office for Water to develop the sharing of information on water and the biodiversity of aquatic environments between French Guiana and its neighbours in Brazil and Suriname. 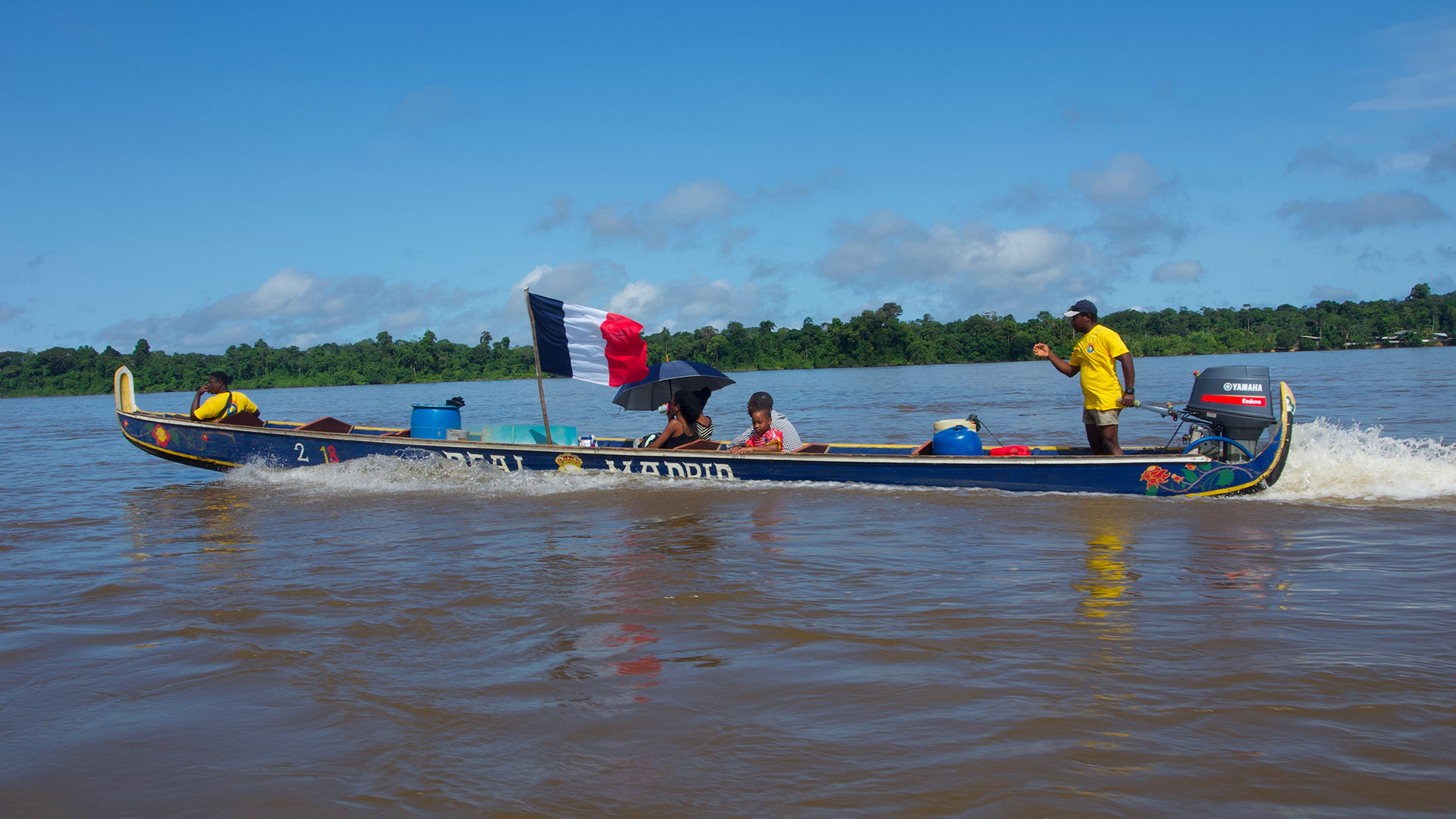