Duration of the project24 months

DDTM: Departmental Directorate of Territories and the Sea

DREAL: Regional Directorate for the Environment, Development and Housing

FLAude: the FORO tool in the hands of professionals!

Published on 08/09/2021
On Wednesday, September 1, 2021, the FLAude team presented its FORO platform at the Aude Prefecture. In a context of climate change, this rich and interactive tool is highly anticipated by the actors of the territory.

Aude is one of the territories most affected by "Mediterranean episodes," a particular meteorological phenomenon of the Mediterranean rim, producing intense stormy phenomena and generating heavy rainfall in a short period of time. After the devastating floods of October 2018, the Prefecture of Aude and the CNES agreed on a partnership to initiate a post-flood observatory, embodied by the FLAude project, to serve the resilience of territories.

Conducted in real co-construction between the DDTM of Aude and the CNES, this project benefits from a maximum synergy between field expertise and space expertise. The final objective is to propose a dynamic decision-making platform -alias FORO- to reduce the vulnerability of the territory to extreme hydro-meteorological phenomena linked to climate change.

Its development accelerated thanks to the SCO labeling in March 2020, the FORO tool has been developed as close as possible to local actors in order to meet their needs. By combining regular satellite images and field information to assess various impacts of flooding, FORO models the synthesis of this knowledge to provide climate diagnostics on flood risks, and to carry out and refine actions to reduce vulnerability. The results and the associated good practices will benefit the Flood Observatory, other services and departments in the regions and departments (DDTM, DREAL, DEAL, EPCI), as well as the actors of the Satellite Application Plan of the Ministry of Ecological Transition. 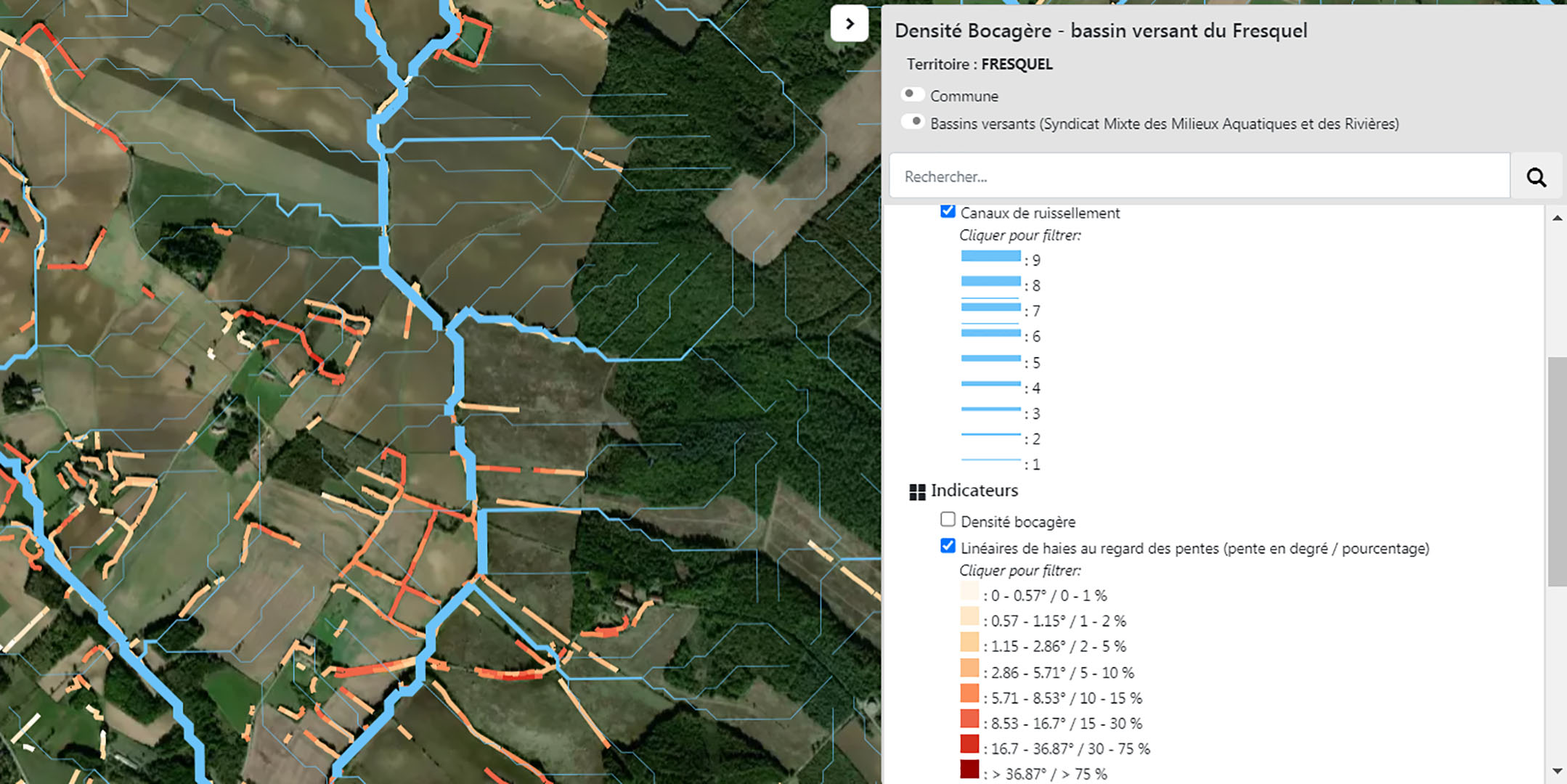 Thanks to FORO, the location of the hedges with respect to the hydrological network and the slope of the land allows to identify the zones at stake. © FLAude

At the Prefecture of Aude, in Carcassonne, the tool was very well received by the State services and elected officials of the department, leading to numerous exchanges with the audience. In addition to the DDTM Aude, the collective association for aquatic environments and rivers indicated its willingness to use the tool, as did the Chamber of Agriculture. The Lezignan-Corbières intercommunality has already requested training to use the tool as soon as possible. 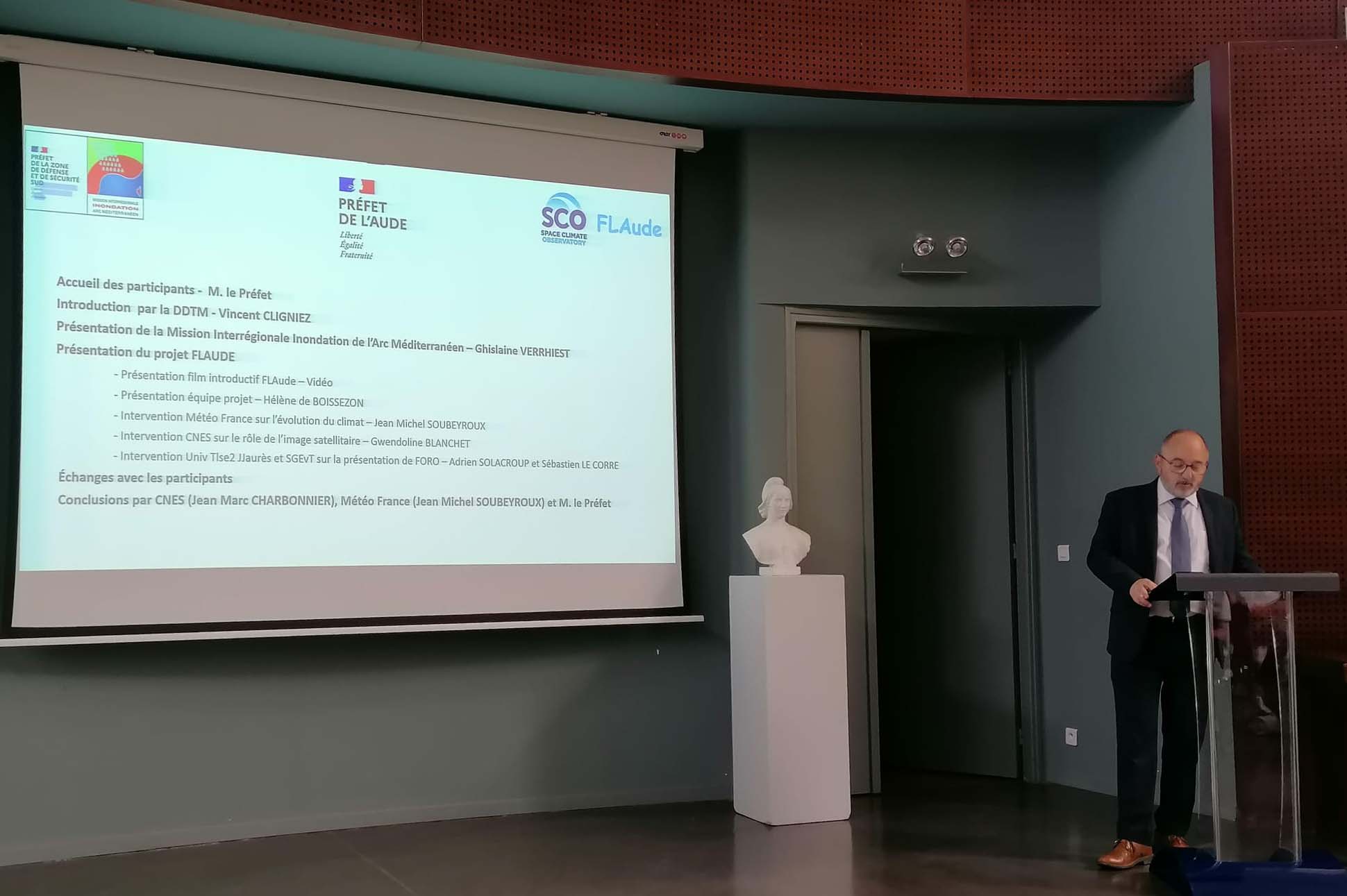 Particularly attentive to the development of the post-flood observatory, the Prefect of Aude invited potential users to the official launch of the FORO tool. © SCO 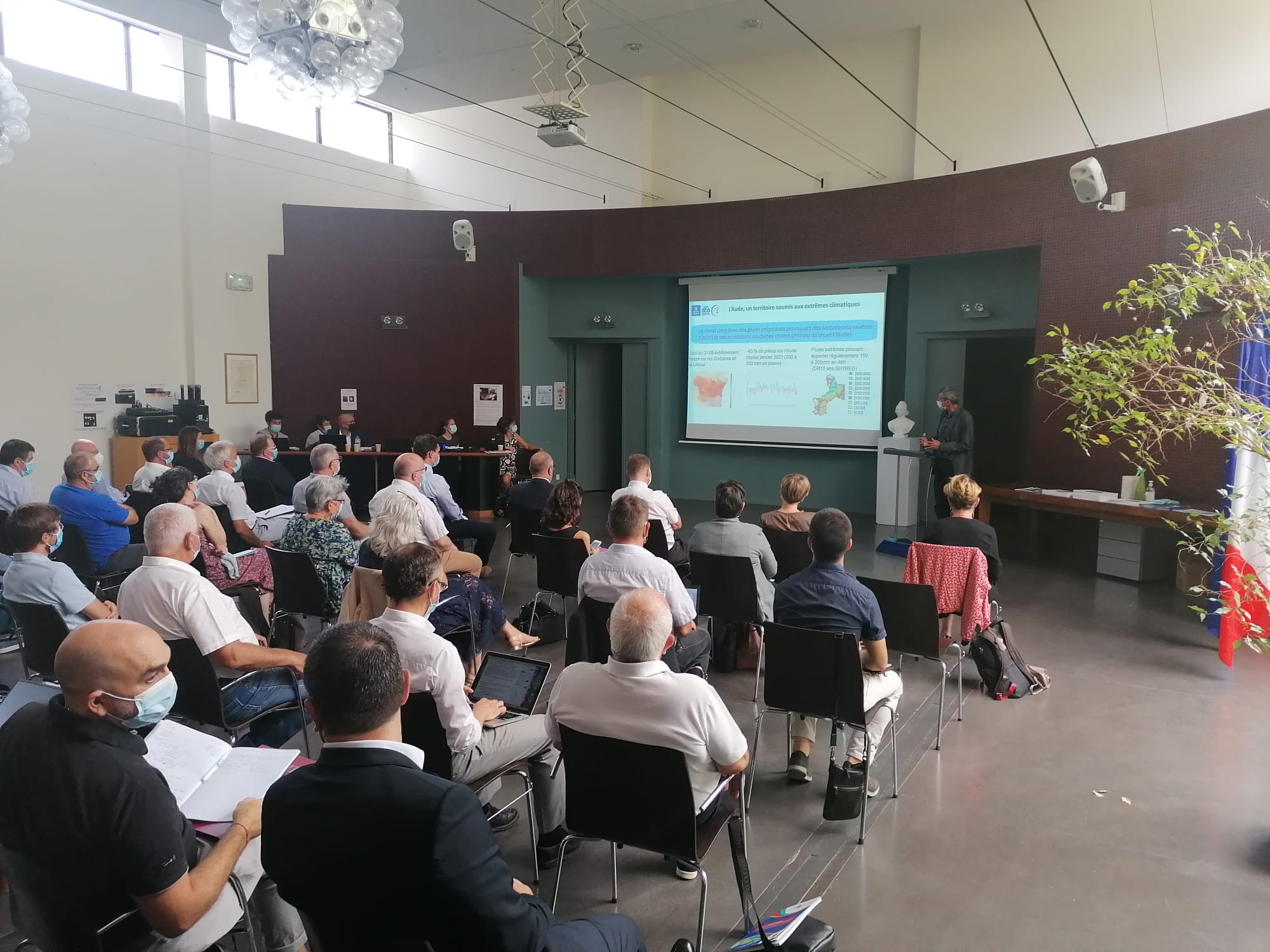 The different partners of the project took turns in front of the audience, starting with Météo-France to present the climatic evolution of the territory. This was followed by presentations from CNES on the role of satellite imagery, and from the University of Toulouse 2 Jean-Jaurès and SGEvT (General Land Evaluation Society / Société générale d'évaluation du territoire) to present the FORO tool. © SCO

Invited by the Prefecture, the MIIAM (Interregional mission "Mediterranean Arc flooding") also intervened within theframework of its mission of coordination of the prevention of flood risks on the Mediterranean arc. Relying in particular on the hydro-meteorological vigilance statistics on the Mediterranean Arc scale, the latter is carrying out remarkable work whose complementarity with the FLAude project is obvious.

The project team plans to organize several training and appropriation sessions of FORO. If this September 1st marks the opening of FORO to all territorial actors, it will be available to the general public in a few months, after taking into account the territorial users' feedbacks.

The transposability to other territories being a strength of SCO labeled projects, the MIIAM is very interested in participating in the "post FLAude", by proposing a partnership with Spain and Italy.