The SatLCZ tool is operational

Published on 21/12/2021
Labelled SCO in 2020, SatLCZ has achieved its objective: an automatic and replicable classification of the urban fabric into local climate zones or LCZs. The result of a study by Cerema, the partnership with Airbus DS GEO and CNES has finalised its transformation into an operational tool. We interviewed the trio of partners who, in response to questions, made a unanimous statement on the urban subject.

There are three men whose teams have brought the SatLCZ project to fruition: Dominique Hébrard, Project Manager for CEREMA, Jean-Charles Pruvost, Head of Image Production France at Airbus DS GEO, and Vincent Lonjou, CNES referent for the SCO.

The SatLCZ tool is fully automated and uses very high resolution satellite images to map the urban fabric in Local Climate Zones (LCZs). What does it do?Dominique Hébrard: Schematically, urban fabrics, depending on their morphology, accumulate more or less heat during the summer. Called urban heat islands, this phenomenon occurs at night and reflects the difference in temperature between the different urban fabrics and the surrounding countryside. Secondly, these urban fabrics react differently according to various characteristics such as the location and height of the buildings, the type of land use, its level of sealing, etc.

Written by two researchers - Stewart and Hok -, the LCZ (local climate zone) method is widely accepted by urban climatologists. It is based on a nomenclature and a series of indicators that make it possible to classify the territory as an LCZ and which, in fact, reflect a certain sensitivity of the districts to the heat island phenomenon. The final objective of SatLCZ is to produce maps that give the actors on the ground a better knowledge of their territory in order to implement solutions in their urban fabric: desoiling, renovation of the built heritage, planting of vegetation, adaptation of mobility, etc.

Why are satellite images so relevant to the SatLCZ method?Dominique Hébrard: Without going into detail, we need to produce a certain number of indicators to characterise the LCZs. In France, databases allow us to work, but there are still 'gaps' in the territory, particularly for detailed knowledge of soil sealing. It is to fill these gaps that satellite images are useful.

Vincent Lonjou: In France, we are fortunate to have the IGN, which creates reference data for the entire territory. But this does not exist in all countries, and it is a real challenge to fill this gap.

Jean-Charles Pruvost: To retrieve the geographic data we need, we can send people out into the field, using drones or planes, but this is expensive and difficult to set up, especially everywhere in the world. Pleiades imagery, at 50 cm resolution, allows us to generate consistent geographic data with the degree of accuracy needed to produce the indicators required for our climate maps. The key is stereoscopy, specifically programmed for our needs: Pleiades takes single or tri-stereo images of the same area to reconstruct a 3D model of the surface including the ground, vegetation and buildings. Thanks to the algorithm we have developed, we can extract these buildings and calculate their volume in the most automatic way possible. It is this volume information that is crucial as input for Cerema in order to calculate the urban climatology difference.

The project has been piloted in France and Thailand. Why was this done?Jean-Charles Pruvost: First of all, we selected an area where we had a lot of reference data to validate the methodology, in this case the city of Lille in France. Then we chose an area around Rayong in Thailand because Airbus DS was working there on other projects. This allowed us to verify that the methodology is applicable to all landscapes and habitats.

LCZ classification of the city of Lille from a Pleiades satellite image. © SatLCZ

Who are and will be the users of SatLCZ?Dominique Hébrard: The first beneficiaries are the local authorities who need this knowledge to adapt their urban fabric to the problem of heat islands. This is not a new issue, but its consideration by local authorities in France is!  That said, there is no exclusive model for beneficiaries: it can be a small community, a metropolis, and why not imagine a more global order in the context of acquisition of large heritage, with data on a regional or national scale...

Jean-Charles Pruvost: I can also imagine uses at several levels, from a city's planning policy to very global projects. For me, the ultimate goal would be deployment on a continental or even global scale. In this way, data from all parts of the world would be comparable, a need that these subjects suffer from.

How did the SCO label contribute to the SatLCZ project?Dominique Hébrard: A project that borders on research and is carried out with an operational objective, SatLCZ is a long-term project for Cerema. Not only does the SCO label represent a form of recognition and legitimacy of the work we are proposing - it is not enough to submit a project to be selected - but it also allows us to put the spotlight on this work. Finally, and this is not insignificant, the SCO provided the framework that helped us to get closer to Airbus DS.

Jean-Charles Pruvost: In this complicated period, the SCO was indeed an opportunity, including to push the subject internally: the investment made by Airbus on this project would not have taken place without the label!

What was the role of each of the partners you represent?Dominique Hébrard: As the project leader, Cerema contributed its technical, scientific and land-use planning skills, from the creation of the project to its operational implementation in the field. On the basis of work produced internally by a team of researchers in urban climatology, we devised an exploitable and reusable method, which makes sense in terms of urban land use planning issues. For this purpose, we also played the role of "assembler" with regard to data, image processing, qualification of geographic products and, from a methodological point of view, the implementation and application of the algorithm characterising the LCZs. Finally, we are involved in the transfer of skills: Cerema supports local authorities on pilot projects, but on a project like SatLCZ, it works alongside manufacturers and SMEs to develop a production and marketing solution. Today, Airbus DS and Cerema are discussing the best way to industrialise SatLCZ in order to change scale.

Jean-Charles Pruvost: Airbus DS GEO supervised the acquisition of satellite images and the production of the basic geographic data, i.e. the land use maps and 3D models.

Vincent Lonjou: As the CNES referent, I was responsible for setting up the legal and contractual framework of the project within the SCO programme. I also monitored the smooth running of the project and provided support for its valorisation.

You mention an industrialisation of the method. How has this project opened up a business opportunity for Airbus DS?Jean-Charles Pruvost: The software implemented in the framework of SatLCZ has been improved over the years, and continues to progress through projects with the French Defence in particular, to end up with a tool for semi-automatic production of land cover maps from Pleiades data. Thanks to the new constellations Pleiades Neo (currently being deployed) and soon CO3D, we will be able to greatly increase our coverage capacity. Their extremely fine resolutions will provide sufficient quality to fully appreciate temporal variations over several years, on a global scale. In fact, the first results generated in recent weeks with the fineness of the Pleiades Neo data are quite simply amazing! These satellites are perfectly suited to the urban environment and we are increasingly interfacing them with our 3D modelling software, the other major focus of Airbus' work on value-added production, such as digital terrain models (DTMs) and surface models (DSMs), right up to complete, textured 3D models.

Finally, what do you think are the challenges of urban adaptation and how does SatLCZ respond to them?Dominique Hébrard: Typically, something is happening. The Climate and Resilience Act passed this summer [Act of 22/08/2021] drives the nail into the coffin on a 20-year-old subject: the fight against the consumption of space. This text sets an objective of "zero net artificialisation" in France by 2050. This means on the one hand that urban land will become increasingly scarce and expensive, and on the other hand that urban development projects will focus on urban intensification, the reconstruction of the city on itself. In this context, detailed knowledge of the urban fabric is a major challenge for densification while adapting cities to climate change. This is already true in France, but the problem is global. I believe it is essential to share methods and tools on the urban object.

Jean-Charles Pruvost: An extremely complicated environment, the urban environment is undeniably a 3D subject. The arrival of Pleiades Neo inspires us to launch an even more ambitious project, which I hope will be completed in 2022, to bring together all the urban issues around this very fine data. 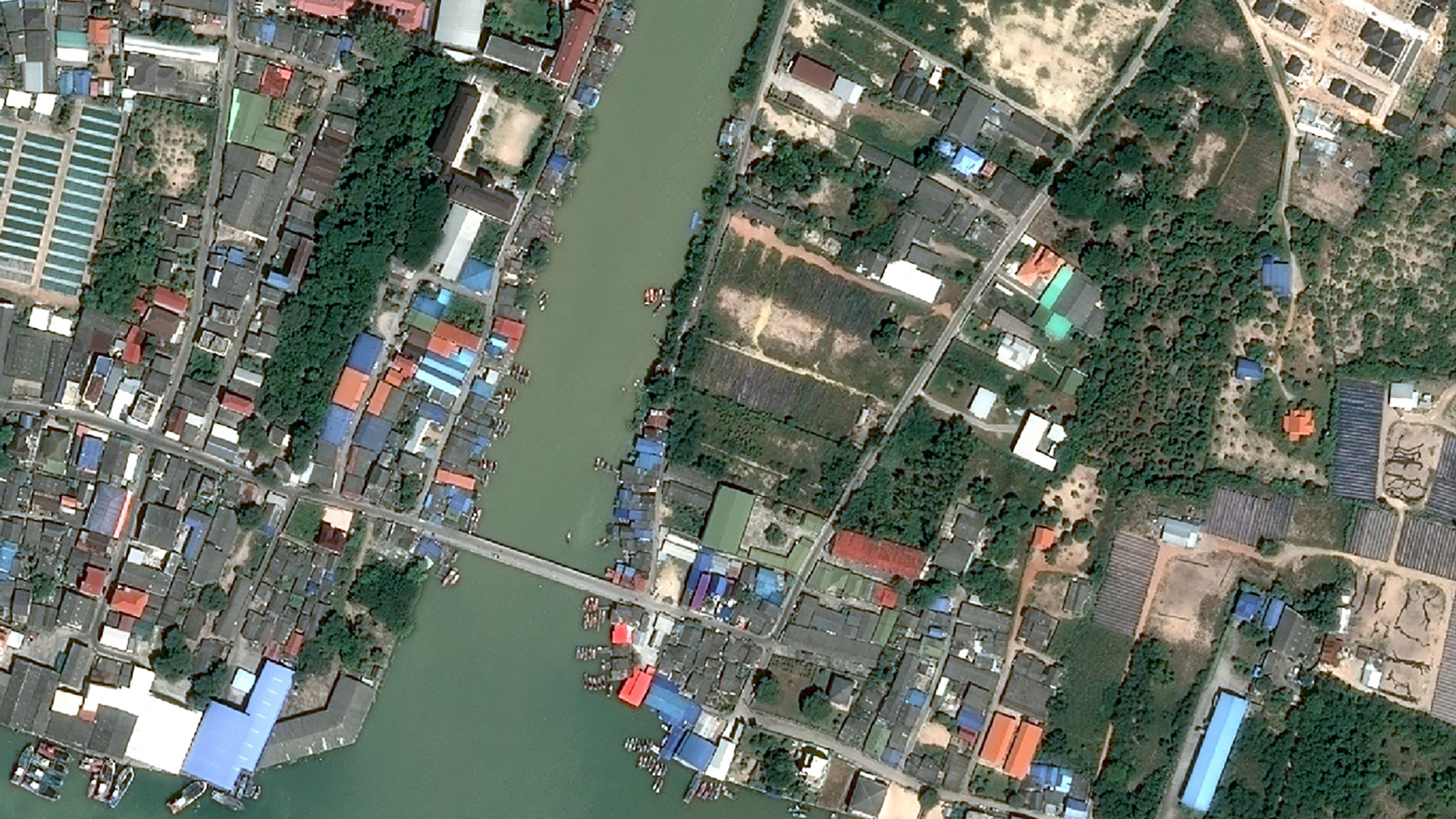