Now an operational tool, the project has developed a methodology to classify local climate zones derived exclusively from very high resolution satellite images. The issues identified are the vulnerability of urban environments during summer heat waves, as well as the adaptation and mitigation of local heat peaks.

Identifying the vulnerability of urban environments during summer heat waves

The project uses very high resolution (VHR) satellite imagery from the Pleiades mission. Using a detailed description of the urban fabric, the aim is to implement a reproducible methodology to develop indicators based on the Local Climate Zone (LCZ) concept developed by the international urban climatology community [Stewart & Oke 2012]. Reproducible in any city, this method segments areas into homogeneous elementary typo-morphological units based on their climatic behaviour. The project’s objectives relate to the vulnerability of the urban environment during summer heat waves, as well as to local efforts to adapt and attenuate heat peaks through better urban design. Identifying LCZs involves producing geographical layers describing urban morphology (four indicators) and land use (three indicators). A study [Leconte et al. 2018] shows that the intensity of the heat island and these indicators can be correlated to the surface scale of the LCZ.

To better support public planning policies in their fight against the urban heat island phenomenon, LCZ mapping can deliver underlying indicators such as imperviousness and vegetation rates but also, when sufficiently fine data exist, a socio-economic vulnerability index.

The project follows up the DIACLIMAP project financed by the ADEME (French environment and energy management agency) between 2015 and 2017 on the Greater Nancy metropolis, SatLCZ demonstrates that the use of VHR imagery makes it possible to produce and update LCZ indicators for any type of urban fabric, with or without such rich geographical databases as those in France. Indicators are calculated using 3D frames with layers of “impermeable surfaces” and “permeable surfaces” taken from the imagery as well as a digital surface model also taken from satellite imagery.

In the first instance, this method will be applied to the area of Greater Lille which experienced a heatwave with temperatures of over 41°C in 2019. This territory having allowed to validate the results, the project has in the second instance integrated a city on a foreign territory, in this case Rayong (Thailand), confirming the transposability of the method.

Lille: Indicators of impermeability rate (left) and vegetation rate (right), two potential levers to reduce the impact of the UHI phenomenon. Indeed, on the one hand, removing the impermeability of soils allows to reduce the storage of heat during the day (by the nature of the materials) and to reduce its release at night. On the other hand, the vegetation allows a cooling of the ambient air, by the phenomenon of evapotranspiration

Lille: LCZ mapping (left) and socio-economic vulnerability index (right) from INSEE data (health index of people with poorer health and social index of poor households). In this example, we note a potentially increased risk for people living in the south of the zone: set of polygons classified as LCZ 2 and 3, and high vulnerability index.

=> To obtain shapefile files for Lille and Rayong, contact the project team via the contact form at the bottom of the page. 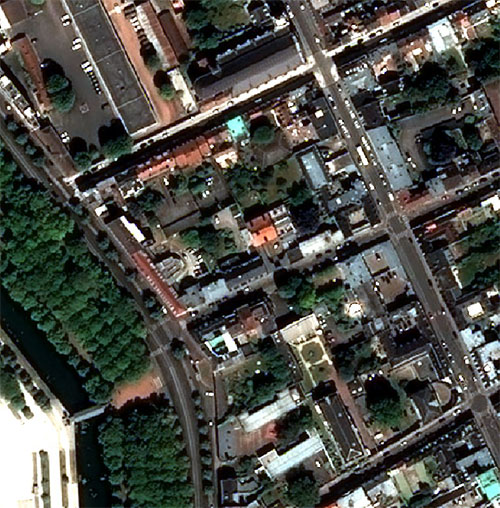