In Varaire, we don't talk about the Global Goals, we live them

Published on 05/01/2023
Only 8 cities have been selected. After New York, London, Bristol, Bogota, Freetown, Sydney and Cannes, here is Varaire, a small rural village in Lot (France), which closes an international exhibition on the SDGs! Who would have thought it? The UN. And, a fortiori, the SCO. To start the year gently, here is not a Christmas tale, but a beautiful real story.

Once upon a time, there was Varaire

Varaire, 348 souls in the heart of the Causses du Quercy, in the southern part of the Lot. At the end of October 2022, the Municipal Council learned that the UN had selected the small village for its exhibition on the SDGs. The Mayor, Marcel Aymard, shyly expresses his surprise: "It's an adventure that we had absolutely not foreseen, everything started very quickly! We knew about global goals by name, but not closely! In fact, these are things that we have always applied as a rural community. It's a way of thinking, a way of working, and solidarity”.

And it is indeed the solidarity that has animated the whole village to get organized in barely a month and a half! Inaugurated on December 18th, 11 totems propose a thematic path in the heart of the village, each number describing a value.  "By discovering the background of the Global Goals, we, Varairean, become aware of the values that we have been carrying and applying for a long time without realizing it. We must promote these values and make sure that they are passed on to future generations", says the Mayor. 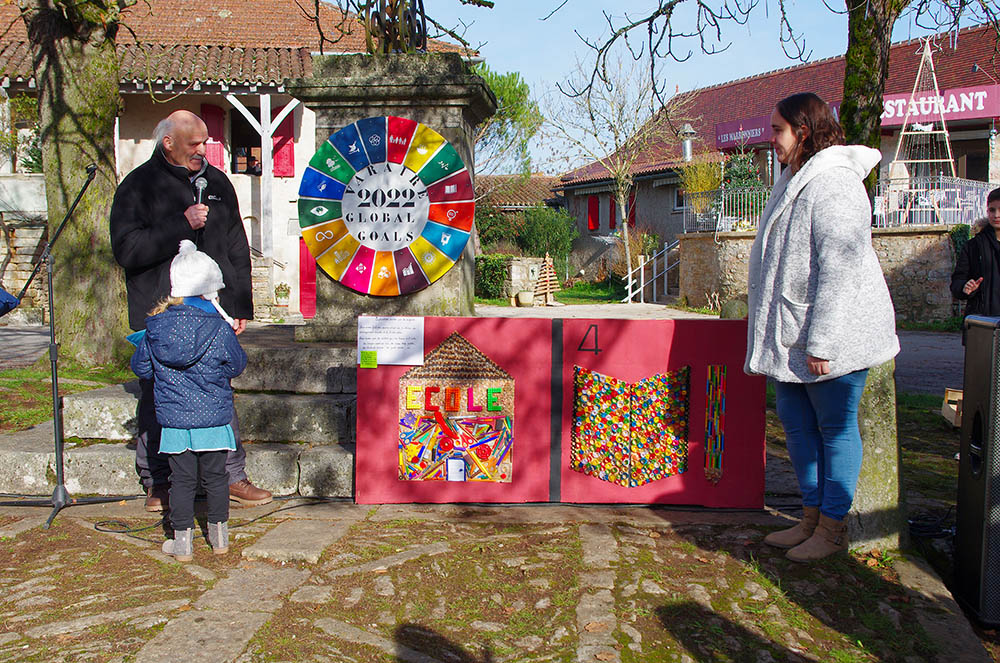 A resident has made wheels with 17 pie charts bearing the effigy of each SDG, painted by the children of the village's school. During the inauguration speech by the Mayor (left) on December 18th, 2022, the little blonde heads inserted in turn the values of today and tomorrow in the biggest wheel. © Mairie de Varaire

In free access until the end of January, the exhibition reserves three Saturdays of January for conferences and animations, some of which are led by speakers of the Regional Natural Park of Causses du Quercy, those of Friday 20th being dedicated to schoolchildren. And, new surprise, on themes as different as the SDGs, the globalization of the Lot or the climate seen from space, three of the four speakers are local children!  (see below)

The SDGs according to Varaire

In preparing the exhibition, the City Council identified 18 actions that respond to the SDG philosophy, and specifically to seven values:

But in fact, why Varaire?

Back six months, in the spring of 2022, when a "newcomer", coming from the PACA region, settled permanently in Varaire, in the family home : Chistophe Picou-Laporte. President of the Cannes Croisette Collections association, he organized the presentation of the UN's ODD exhibition on the Croisette from August 31st to October 15th, 2022. Upon his return, he woke up with the idea of presenting an additional step to the UN, in Varaire. "I had worked with the UN team for eight months and they immediately agreed to the proposal. I would also like to thank the agency Project Everyone, in charge of promoting the UN events, which helped us a lot. And here, I am impressed by the way the city council and the inhabitants invested themselves to prepare everything!"

But still, Mr. Picou-Laporte, how does one talk to the UN to get an impromptu selection? "I went against the grain of the file we put together for Cannes with a sentence that I think really touched them: "In Varaire, we don't talk about the Global Goals, we live them every day". When in big cities we try to educate the inhabitants to these values, Varaire lives them and therefore has a great legitimacy and credibility to pass on these messages.

🎥 See the France 3 Occitanie report on the inauguration (2 minutes, in French)

In addition to the fact that SCO is aligned with the SDGs, we learned about Varaire from... a native Varairean! Vincent Lonjou, an engineer at the CNES Earth Observation Laboratory, accompanies many SCO projects such as Thermocity, Littosat or Sat4BDNB. He is also the pilot of the EducSCO educational project, so he was the perfect person to give lectures, including to school children!

According to Vincent, "Hosting this exhibition is an opportunity for Varaire but also to highlight the fact that climate and sustainable development concern rural areas as much as large metropolises. This transposition allows us to highlight specificities. For example, we can mention the upcoming evolution of food, which will be accompanied by major changes in the agricultural world, or the management of travel, which calls for very different responses in rural areas."

To show all the contributions of space in achieving the SDGs, Vincent will speak in his lectures, of course about SCO projects, but also about a very local phenomenon: the ravages of the Bombyx Disparate, a butterfly whose caterpillar is known to be one of the main defoliators of oak and hardwood forests. "I chose this example because, while satellites can't see the caterpillars, they can map the damage they cause. This is a concrete example of how space technology can be used to monitor the health of forests, which are likely to change significantly as a result of climate pressure," explains the remote sensing specialist. 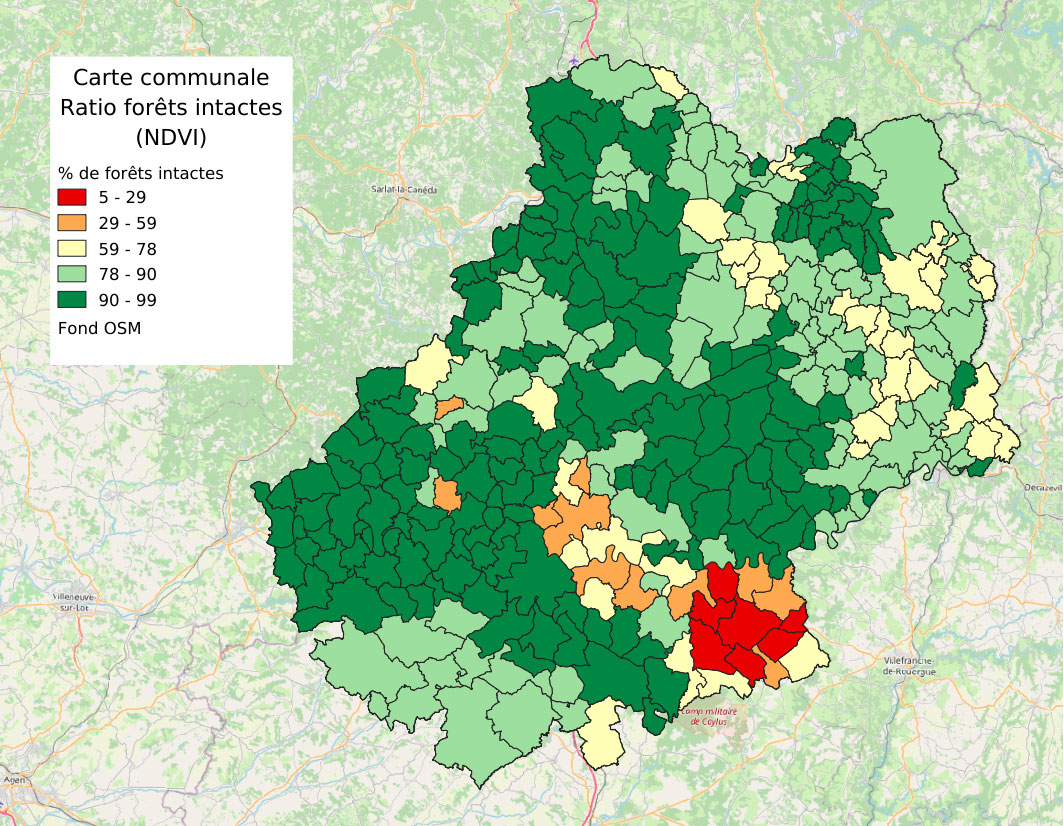 So, if you are from the Lot or almost, don't hesitate to visit Varaire with your family! 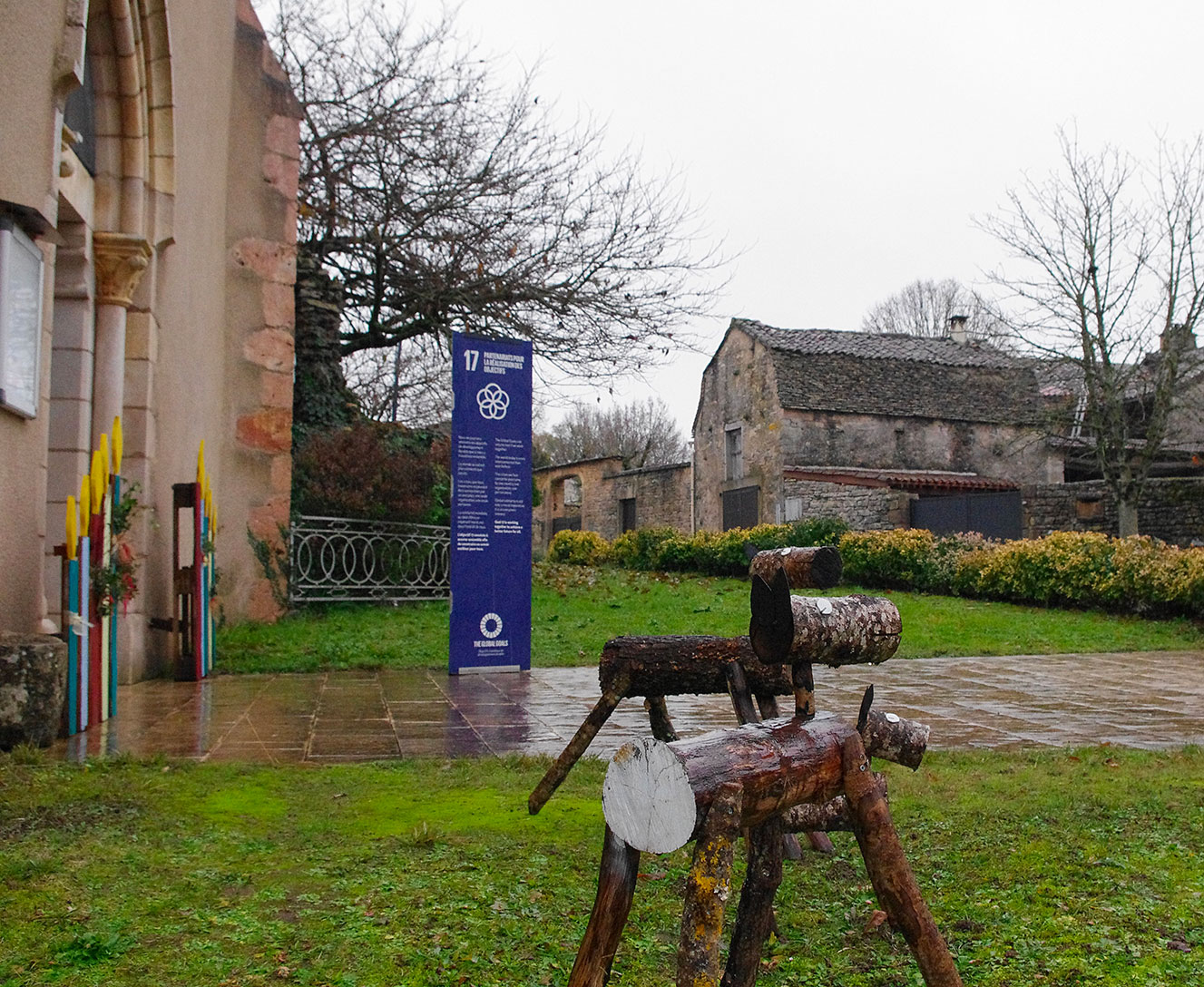 End of the path with the SDG17, partnerships for the achievement of the goals or, according to Varaire, solidarity.  © Mairie de Varaire 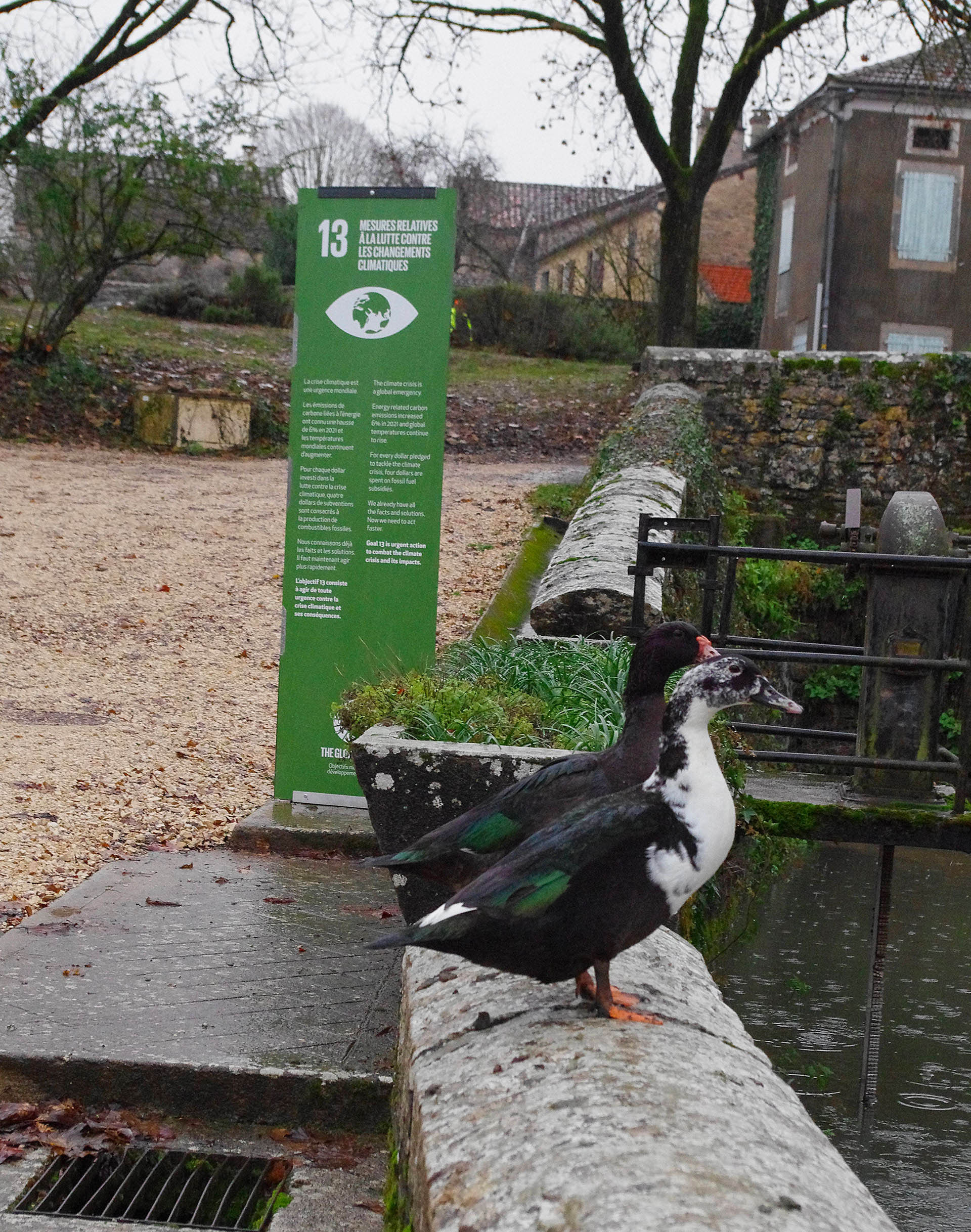 Via a path punctuated by 11 totems, Varaire illustrates the spontaneous application by the rural world of the values carried by the SDGs. © Mairie de Varaire