Published on 23/09/2022
From 18 to 22 September 2022, Paris hosted the 73rd edition of the IAC International Astronautical Congress, under the theme Space4@ll. The SCO took advantage of the event to hold its 10th international Steering Committee and to organise a plenary session on the assets of Earth observation, spearheaded by the SCO, to adapt our societies to the impacts of climate change.

The IAC is a unique meeting of all space communities alongside the growing global ecosystem of start-ups, entrepreneurs, laboratories, researchers and manufacturers who could be involved in or benefit from space activities.

For the SCO, it was an opportunity to regroup its forces and to welcome the entry into force of its founding Charter on 1er September 2022, ratified by 32 signatories to date. During a round table discussion, it was also able to demonstrate the concrete nature of its projects to bring space closer to users and operators in the fight against climate change.

On Monday 19 September 2022, the SCO held its 10th Steering Committee, chaired by CNES (France) as organiser of the IAC.

In front of some 40 members (in person and online), the Argentinean Space Agency CONAE, already a signatory of the Declaration of Interest in 2019, renewed its commitment by ratifying the founding Charter of the SCO. New entrants who signed the Charter last June, representatives from the Mohammed Bin Rashid Space Centre (MBRSC, United Arab Emirates) and the National Oceanographic and Atmospheric Administration (NOAA, USA) presented their activities in Earth Observation for Climate, both welcoming the coordinating role of the SCO in operationalising these types of initiatives.

In a studious and interested atmosphere, the discussions focused largely on the new governance of the SCO and the implementation of projects at international level. To this end, it is envisaged to create a working group mobilising the expertise of all members to support the Focal Points in matching projects with the SCO criteria. As a timely example, SCO France has presented its call for projects, open until 15 November for the whole of Europe. Similarly, the Italian Space Agency announced four winners of its call for projects, several of which could be labelled SCO.

In the panorama of major upcoming meetings, the SCO invites its members to meet at COP27, from 14 to 18 November 2022 in Sharm El Sheikh (Egypt), as well as at GLOC (Global Space Conference on Climate Change) in Oslo from 23 to 25 May 2023.

The next Steering Committee will take place in January 2023, with only the signatories of the founding Charter.

Because climate change spares no region of the globe, this plenary session held on 20 September 2022 offered a real world tour.

On the theme "New horizons for Earth Observation: adapting our societies to the impacts of climate change", six speakers took the floor: 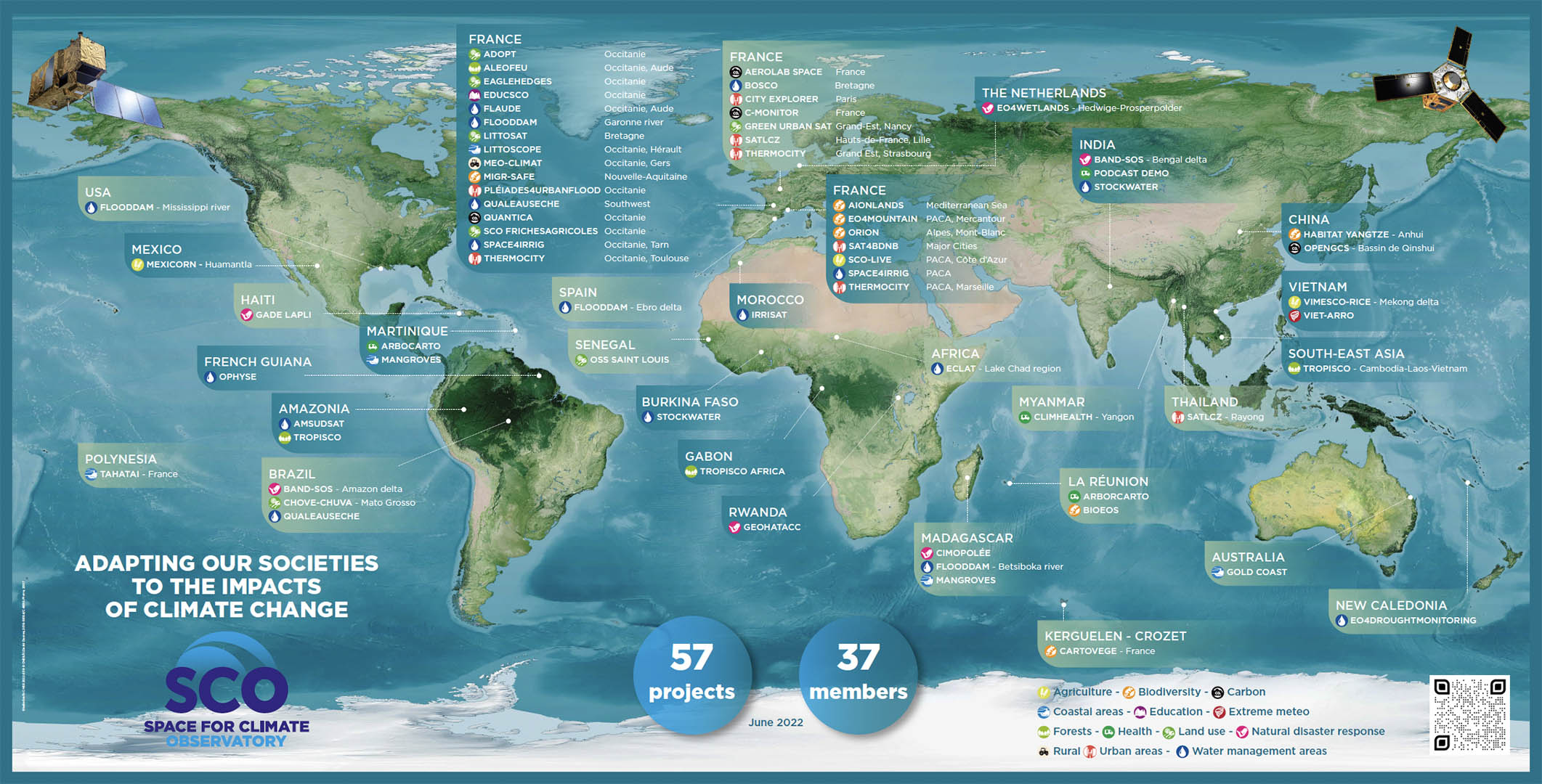 The SCO project map (available for download in the Resources menu). © SCO 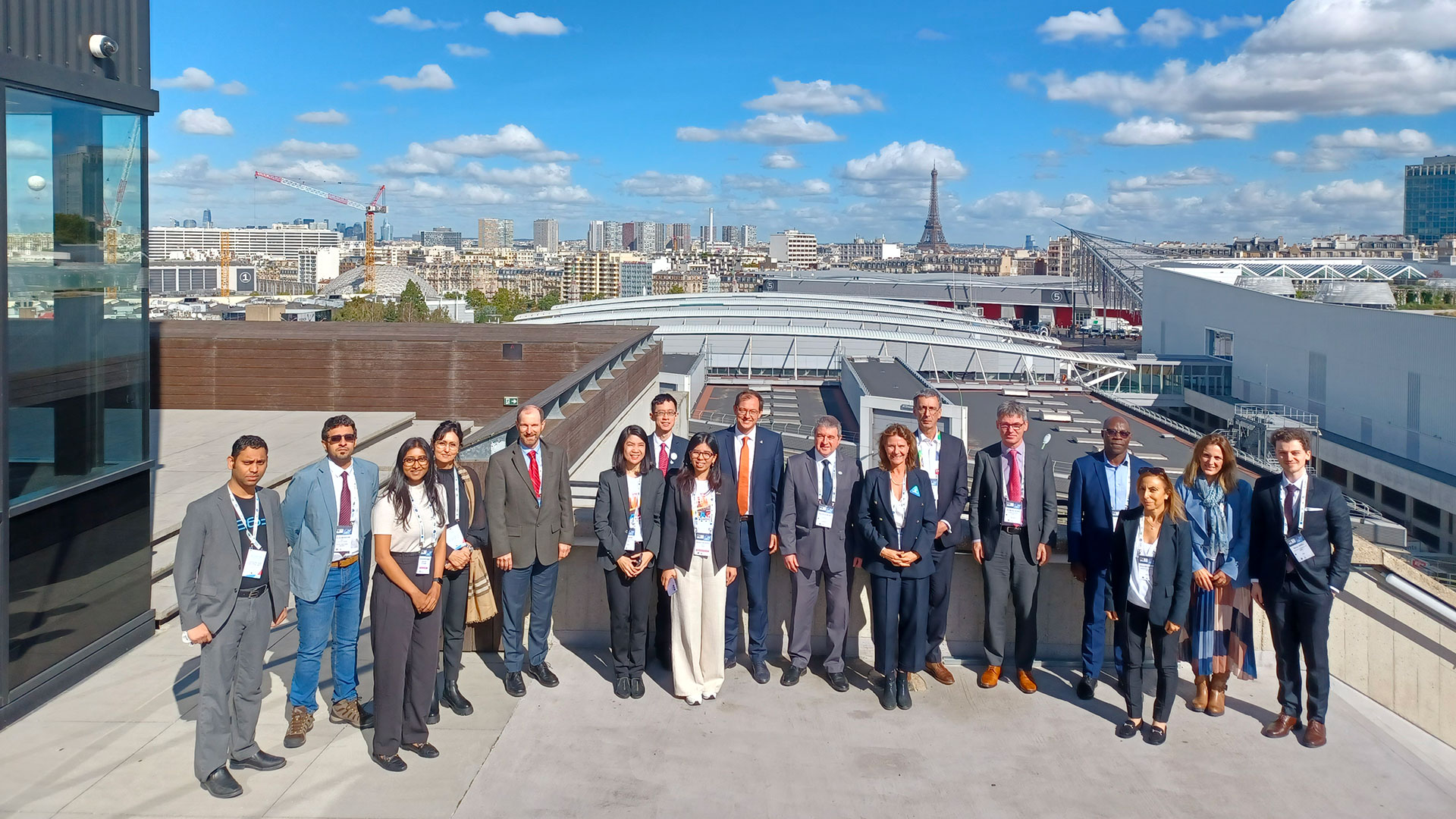