27Sites in Metropolitan France and Overseas

All the "One-to-ones"With the UNDP

Published on 30/04/2021
The word "earth" refers to our planet, its soil and subsoil, not to mention the fluids it contains. BRGM has developed a wealth of knowledge and skills that it shares within SCO France. Let's discover how this institution uses spatial data with Gilles Grandjean, Director of the scientific program on natural hazards and territorial resilience at BRGM.

As an IAC (France Inter-Agency Committee) member, how do you perceive the SCO France?

Gilles Grandjean: I define SCO France as a national network whose vocation is to bring together the scientific community, public authorities and companies on objectives in line with the major international summits such as the One Planet Summits. I felt that the call for projects and the evaluation of the proposals submitted showed a desire to ensure a better transfer of R&D activities to public and private end-users, to act as a booster that strengthens the production of climate services for the various decision-makers. 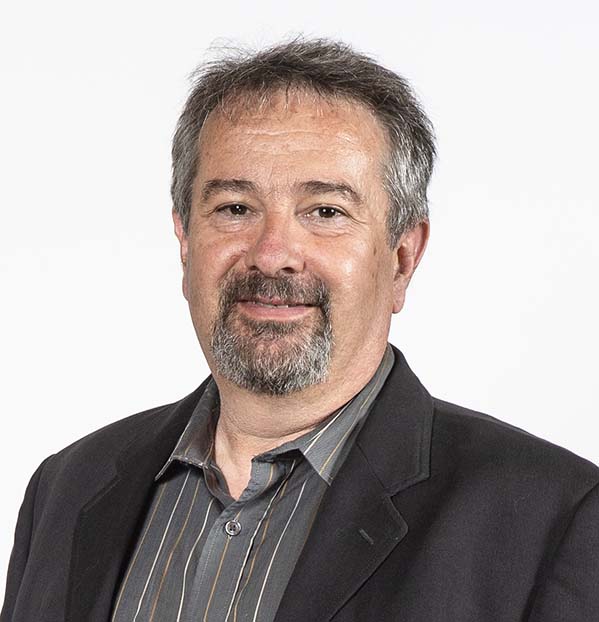 How does satellite data benefit the work of your teams?

G.G.: In my opinion, there was a turning point 15 years ago when programs like Copernicus emerged, which made space imagery more accessible to the general public. Today, the offer is exploding, especially with the Sentinel family of satellites, which offers recurrent, global, optical and radar data. Our researchers cannot ignore the production of such data, moreover absolutely fantastic!

At BRGM, we have been using remote sensing for 20 years, first applied to mining, then to environmental problems. Then came the issues of water resource management, risks and land use planning, themes for which the State services in particular solicit us. In fact, BRGM uses all these spatial sensors to develop products that will best serve public and industrial decisions: impacts of rising sea levels, post-crisis damage analysis, identification of soil movements - tectonics, landslides or shrinkage/swelling of clays, etc. There is no shortage of subjects to exploit spatial imagery! Fed with these data, the tools will be able to provide a much more spatialized and integrated vision of indicators, particularly in terms of adaptation strategies to global changes, and therefore climate.

What is the role of the MRO in the Littoscope project, which is particularly emblematic of the SCO approach? What is the interest of satellite data?

G.G.: In this project conducted with CLS, we were able to digitally model the hazards of marine submersion in a very precise manner on two coastal sites: Gâvres and Palavas-les-Flots. BRGM has contributed to determine how to use this information to anticipate future extreme events and to build an Internet dissemination tool to provide public access to these research results.

Satellite data have been used in several ways, starting with altimetry for sea level and optical imagery to measure surface relief. But if we want to better assess future flooding phenomena, we must take into account both the storm effect, the general rise in water level - which increases the impact of flooding -, and the fact that a coastal area can sink when it pumps water into its subsoil. In the latter case, the subsoil undergoes a contraction that causes a slight vertical movement of the whole area on the surface, which is measurable by radar interferometry. As this vertical movement is not related to tectonic or geological activity, we can derive from it the intensity of pumping and water catchment. A study on Manila shows particularly well this use of the satellite: 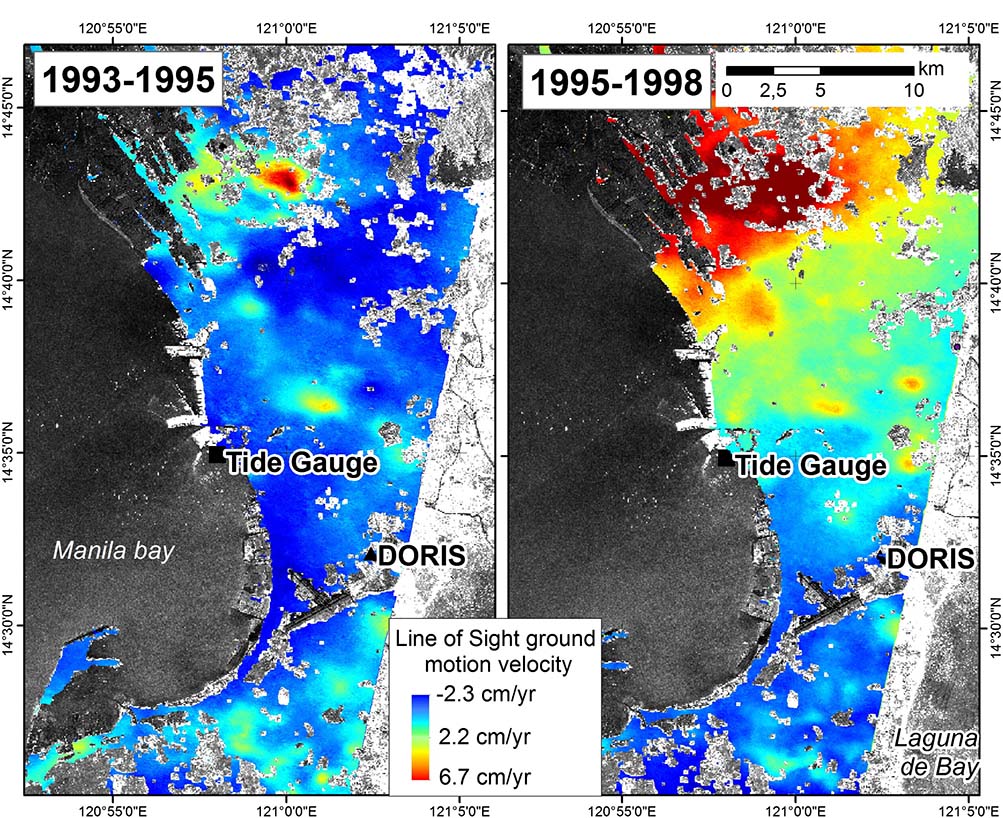 Ground motion velocity maps in Manila, Philippines. Radar interferometry reveals that an increase in the rate of subsidence (subsidence of the surface of the earth's crust) appears between 1995 and 1998 in the northern part of the city, probably due to groundwater pumping. extracted from the DInSAR urban ground motion study from 1993 to 2010] © BRGM/LIENSs

Did you participate in the second call for French projects?

G.G.: I participated for the first time in the labeling committee, in this case to evaluate four projects, and I found this process very virtuous. Indeed, the numerous video exchanges of the labeling committee allowed for a real co-construction with the teams, with the sole purpose of making each proposal evolve so that the project could expand or reposition itself on more targeted objectives.

For this 2021 vintage, BRGM has positioned itself on Stock Water and Space4Irrig, two projects devoted to better management of freshwater resources. Why this recurring theme of water at BRGM?

G.G.: BRGM is certainly concerned with soil and rocks, but also with the water that is locked up in them. In fact, we devote one of our eight scientific research programmes to water resource management, a field in which BRGM has become a reference player. We are of course very much oriented towards the underground resource, but the latter also depends on the interaction with surface water, so we need to have a global analysis of the system. We therefore study groundwater, surface water hydraulics as well as the interaction between surface and subsurface water with deep water. For this, we collaborate with research institutions such as CNRS and INRAE, as well as more operational services such as Schapi (Service central d'hydrométéorologie et d'appui à la prévision des inondations). During the evaluation of the SCO projects, BRGM therefore chose to support these two projects because they will monitor the volumes of water stored in groundwater (Space4Irrig) and in dams (Stock Water).

G.G.: In my opinion, the SCO should be better recognized as a European and international label, so that proposals can access large-scale public funding. I am thinking in particular of the ANR (National Research Agency) calls for proposals, the Horizon Europe framework program for research and innovation, but also the possibility of benefiting from regional funding under the ERDF, for example. This would motivate scientific teams to focus on the exploitation of space imagery applied to climate change.

BRGM, the French national geological survey, is the leading public institution in the application of earth sciences to manage soil and subsoil resources and risks from a sustainable development perspective. BRGM is a partner of many public and private players and focuses its activities on scientific research, support for public policies and international cooperation. 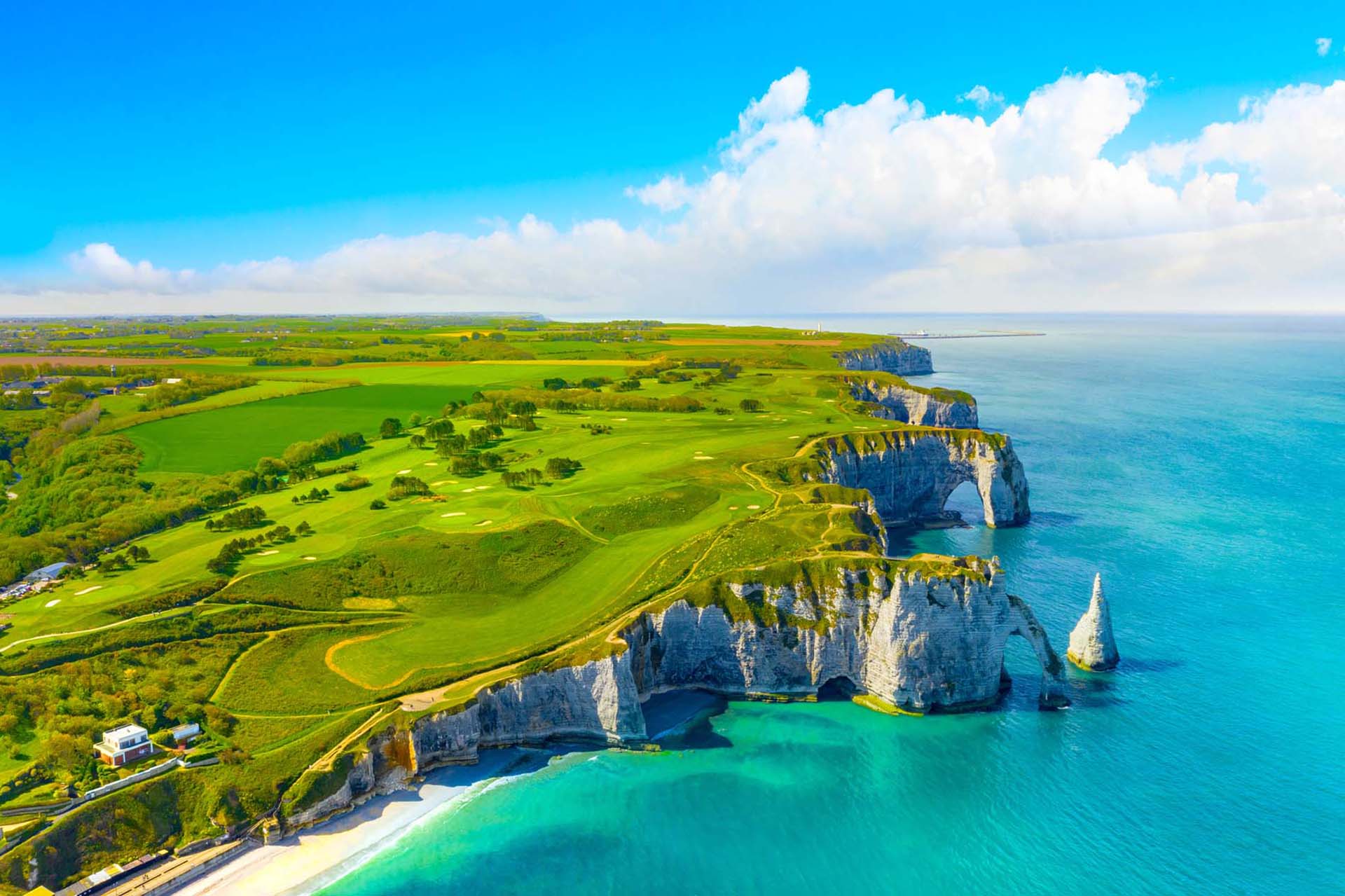