EO4DroughtMonitoring is a decision support tool for institutions and management for the agricultural sector. The system is able to assess the intensity of drought events, estimating their severity by analogy to a historical reference state and, coupled with current data, providing an indication of the plausible future trajectory of a hydrological season.

Tool for characterizing, monitoring and forecasting drought on a territorial scale

Through a visualization and dissemination platform of information (HMI), these indicators provide an objective, updated, spatialized and temporal response to the institutions for understanding the drought phenomenon. The tool also helps producers to make informed decisions by allowing them to manage their crops more effectively, as it is adjusted to environmental conditions and their evolution. The project team is now working on making the tool sustainable in other territories and, thanks to ad hoc partnerships, extending its functionalities.

Between August and December, New Caledonia is plagued by a yearly period without substantial rainfall. As a result, rivers, soil and vegetation dry up, leading to consequences on agriculture, water resources and the fight against wild fire. As a result of global change and over the past fifty years, we have observed in New-Caledonia a substantial rise in temperatures also resulting in increasing stress on water resources leading to conflicts. These elements both directly and indirectly impact New Caledonia’s rich biodiversity as well as the different ecosystems and natural environments that make it up.

Currently, Météo-France NC uses data from rain gauges (Standardized Precipitation Index SPI) to track meteorological drought events. This index quantifies precisely the recurrence of rainfall over the last 60 years. Nevertheless, rain gauges do not cover all municipalities as spatial heterogeneity in drought events, particularly in early and late mitigation phases, complicating the labelling of such phenomena as agricultural disasters by decision makers. In this regard, the use of a spatialized vegetation index could fill this gap. An index qualifying the state of the vegetation seems a priori more adapted to characterize agricultural drought than the current tool which only takes into account the rainfall deficit whereas temperature, humidity, wind and global solar radiation also contribute to the water stress of plants.

Led by INSIGHT and in close collaboration with Météo-France NC, the EO4DroughtMonitoring project allows the development of a drought monitoring tool based on proven and objective indicators derived from Earth Observation (EO) data , in order to respond primarily to the needs of the main user identified, the Rural Agency, for decision support in triggering aid to farmers. Thanks to the processing of complementary satellite products (optical, thermal, microwave), the tool estimates vegetation, temperature and soil moisture anomalies which are then combined with meteorological products (precipitation, reference evapotranspiration).

EO4DroughtMonitoring predicts whether drought conditions will occur, worsen or cease during the next three month. The SPI climate index, produced at stations across the territory, was used to evaluate and calibrate ensemble forecast data produced by Météo-France and the European Centre for Forecasting (ECMWF). These calibrated forecast data were then combined with satellite indicators of the current state of agricultural drought to predict future changes in the drought event. Drought forecasts are then classified as follows: "Stopping", "Forming", "Reducing", "Persisting", "Worsening". 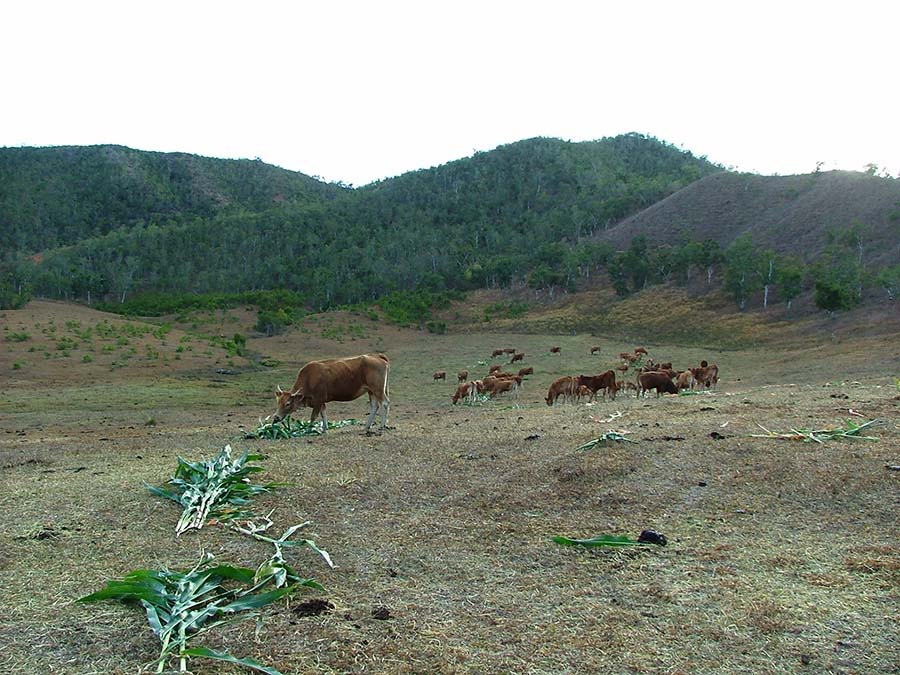 The final product is a simplified, clear and updated web-based information dissemination platform to allow the non-expert use of the provided information from the tool:

The current drought maps as well as the evolution trends are disseminated by area of interest according to the users (e.g. agricultural areas for decision makers and plot for producers). 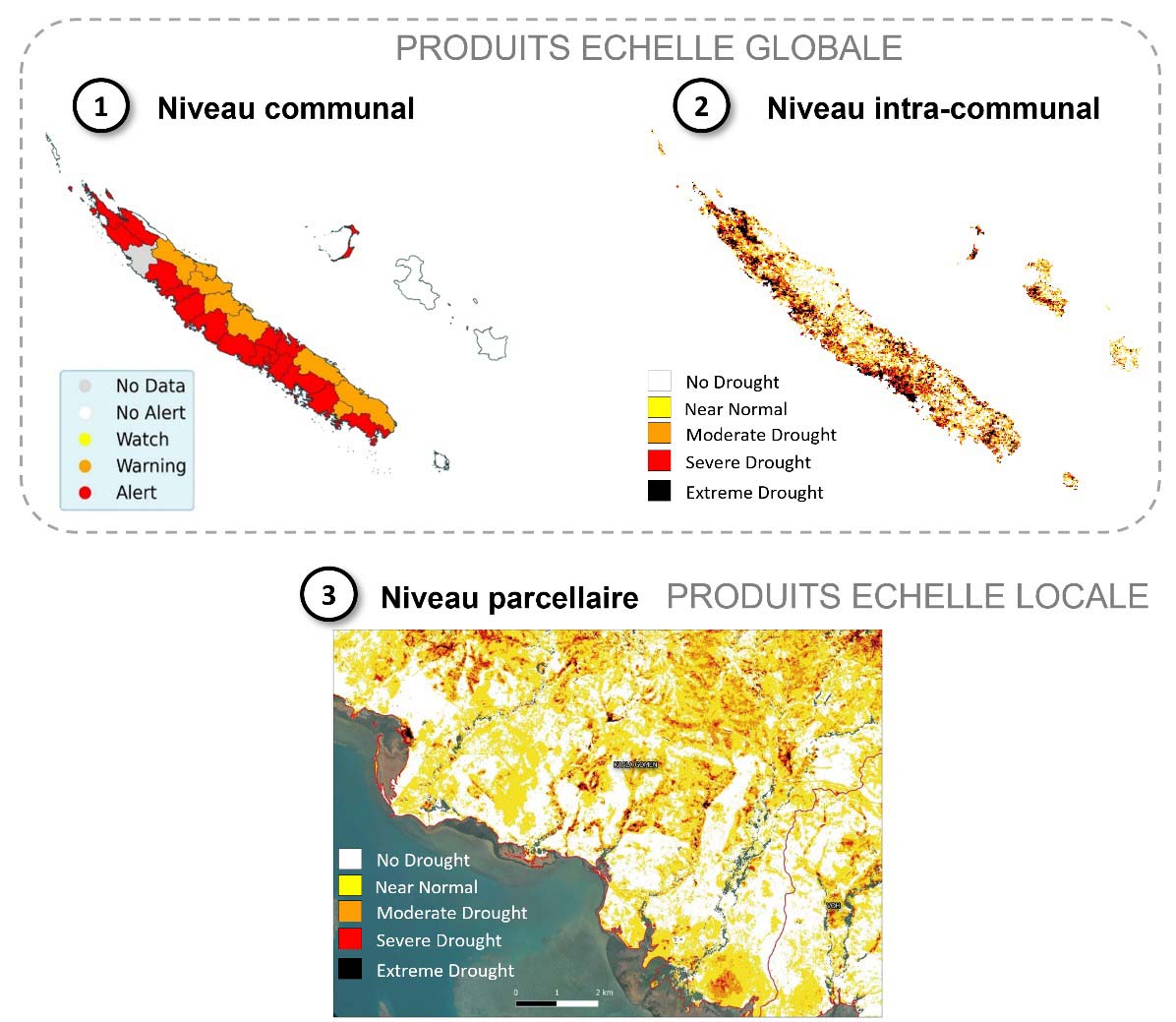 The platform is accessible by the user at the following link: eo4dmweb. The access is done by having generated beforehand a secured connection of type VPN (Virtual Private Network) to the server of INSIGHT on which the platform is hosted. For any access request, you can contact the INSIGHT SAS technical team: geo-contact@insight.nc.

The work carried out and produced in this project has confirmed the relevance and usefulness of such a tool for monitoring plant drought in New Caledonia. Several uses of this work are possible, some of which are already in place.

A first objective at the end is to perpetuate the tool developed in this SCO project. To this end, INSIGHT has joined forces with the Observatoire de l'Environnement pour la Nouvelle-Calédonie (OEIL) in order, firstly, to implement the production and operational dissemination of the plant drought indicator in New Caledonia and, secondly, to adapt and develop the indicator in question in other island territories in the region, such as French Polynesia, Wallis and Futuna or Vanuatu. This collaboration has already been initiated, notably in the framework of a Pacific Fund project in which OEIL, INSIGHT and IRD (UMR Espace-Dev, for scientific support) are involved. Regional partners such as the CSIRO (Australian governmental organization for scientific research and involved in the regionalization part) and the SPC (Pacific Community, regional organization for the development of Pacific island states and territories) are also being consolidated.

A second objective is to enhance the value of these data through the implementation of products and services allowing them to be cross-referenced with other information in response to thematic needs, such as: agriculture (decision support for producers as well as for administrations in charge of supporting the sector), risk management (forest fires and landslide hazards in particular), water resource management, etc. In the particular case of an "agricultural" valorization of the drought indicator, steps have already been taken to bring together local actors in the field (Rural Agency, Chamber of Agriculture and Fisheries of New Caledonia, farmers, Government) and metropolitan actors (MEOSS, a Toulouse-based satellite image processing start-up and partner of the SCO Space4Irrig project) in order to set up a project dedicated to the management of water resources in agriculture: qualification of the water needs of plants and of water use for a farm. The aim will be to couple the drought indicator with complementary indices on the state of crops (biomass evolution, presence of irrigation) in order to produce maps of needs and practices that can be used by producers. The final objective is to provide a steering and decision support tool to public and private actors in the fields of agriculture and water for a fine and reasoned management through spatial imagery. 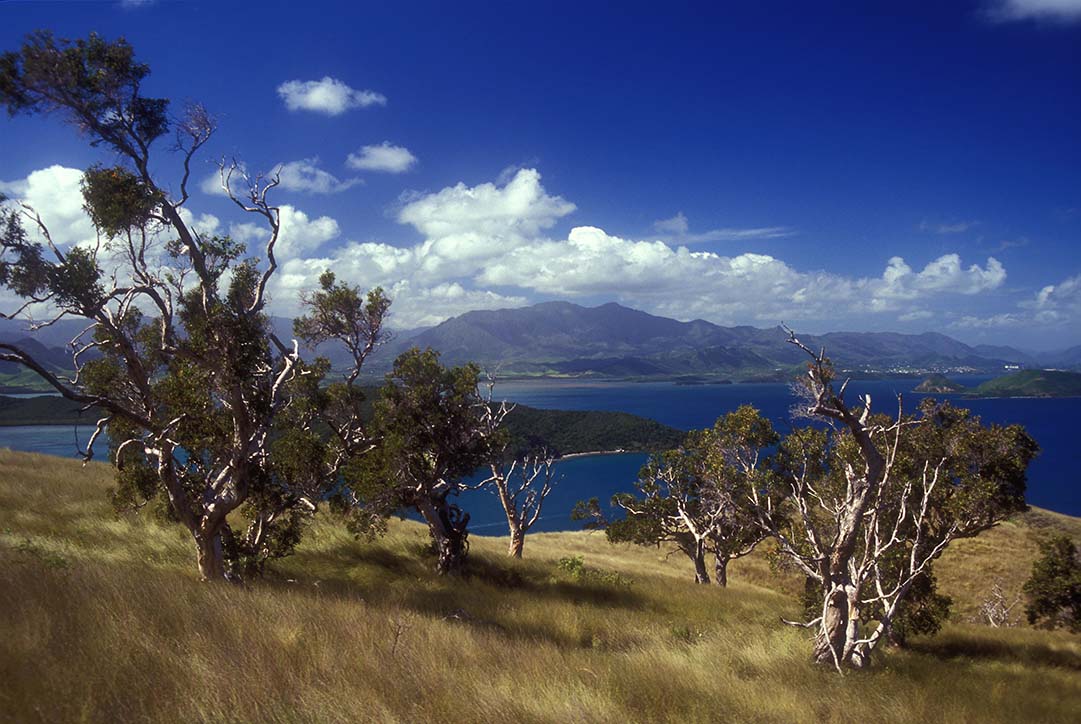