Next call for projects3rd quarter 2022

Published on 17/03/2022
The third call for projects of the SCO France resulted in the certification of 14 projects over seven themes, including a new one: wildfires. Discover this new edition.

Stay tuned: this article will be updated regularly to include the links towards projects’ presentations.

The strength of this project lies in the development of a service capable of evaluating the sensitivity to flooding of urban or highly anthropised territories. As a result, it focuses on supporting public decision-making in terms of planning and risk management. Using Pleiades satellite imagery, the project classifies land use and produces quantitative indicators related to urban morphology and its dynamics, soil sealing and the evolution of flood risk. The demonstrator is being tested in the city of Montpellier (France), with the support of a visualisation platform.

Focusing on French urban territories, Sat4BDNB addresses the vulnerability of certain districts to the effects of climate change. Thanks to an innovative combination of several data sets, the project provides an overheating indicator identifying urban heat islands and morbidity for the whole of France.  By mixing socio-economic and environmental data, the project will assist and guide the construction industry to design the best renovation strategies.

Due to the effects of climate change and anthropogenic pressures, a rapid and global decline in the biodiversity of coastal environments has already been observed. In response to the need for simple and operational monitoring systems, the BioEOS project aims to provide adequate and replicable observation tools based on the analysis of the dynamics of coastal biodiversity through space and time. The identification and precise monitoring of the state of coral reefs, the extension of seagrass beds and the geomorphological dynamics of the seabed are all relevant strategic areas for initiating climate resilience. Trajectory indicators will also be created to predict possible changes in these environments.

The EO4MedWetland project focuses on Mediterranean wetlands, known for their rich biodiversity and strategic dimension for human activities. To better characterise the state and evolution of these wetlands, the project promotes the joint use of time series of satellite observations with other relevant databases, notably from the Mediterranean Wetlands Observatory. An interactive and evolving geo-portal will offer a monitoring and alert service, as well as decision support to national and local authorities in charge of managing these fragile environments.

Following on from SISMA, SISMA2 demonstrates the value of satellites to enhance climate resilience in the Arctic reindeer husbandry sector. The project focuses on ten Russian regions, most of which are highly isolated in terms of both population density and operational communication networks. Using collars placed on the animals, SISMA2 is developing data transmission tools to analyse their behaviour, gain a better understanding of their habitats, trigger possible alerts and provide additional support for remote herd management.

This project is an extension of AEROLAB, which provided solutions for the monitoring and analysis of atmospheric emissions in the Grand Est region, in particular through in situ measurements (ground, aircraft, balloon). Today, AEROLAB SPACE plans to step up this strategy thanks to f satellite Earth observation data. In support of decarbonisation policies, the project is developing a decision-making tool using greenhouse gas monitoring indicators.

As the Aude region faces worsening wildfire risks, preventing and fighting forest fires are key areas for adaptation to climate change. The ALEOFEU project is building operational tools that integrate the observed and modelled evolution of climatic and territorial conditions. The first objective is to produce dynamic and up-to-date maps of the department in order to construct forecasts of fire behaviour on the scale of the forest areas studied, thus allowing to decide on the adequate course of action. The second objective is to provide analyses of the vegetation basedon the various scenarios established by the IPCC in order to refine the fire risk levels.

The AMSudSAT project aims to monitor water flows in Amazonian watersheds and provide both quantitative and qualitative forecasts of flows in the Paraná River. In collaboration with the Brazilian National Water Agency and the Paraguayan Ministry of the Environment, the aim is to provide relevant information and create strategic indicators through the joint use of satellite and in situ data. The final aim of the project is to promote integrated water resource management and to improve the anticipation and monitoring of extreme events in the area.

Supported by the IRD

The Water reservoirs project addresses the question of the evolution of the quality of water stored in small artificial water reservoirs, which has been seldom studied in France until now. Using high-resolution Sentinel-2 satellite images, the project aims to produce indicators on the trajectory of water bodies by combining multiple hydrological, climatic and socio-economic modelling data. In addition, this project offers support for decision-making, particularly for the installation of new reservoirs, a subject that is regularly prone to strong socio-political tensions.

SCO FrichesAgricoles, which is being tested in a number of municipalities in Occitania, aims to facilitate the identification of agricultural wasteland and to promote better management in order to limit fire and health risks. To this end, the project plans to deploy multiple strategic tools: an algorithm for identifying the areas under consideration through satellite observation, a collaborative data entry application and a consultative decision support application for users. These freely available tools will provide operational support to local authorities and to those involved in planning, environmental conservation and agricultural development.

LITTOSAT offers an innovative dashboard including new data for the analysis of coastal territories and marine protected areas. These environments are both weakened by the effects of climate change and strong anthropic pressures. By making it possible to monitor the spatial evolution of coastal vegetation and the effects of climate change over a short period, LITTOSAT also aims to assess the impact of current policies for preserving these areas. In particular, the project will provide up-to-date and strategic satellite data for monitoring sensitive areas in shallow waters and intertidal zones.

Supported by the University of La Réunion

The Cimopolée project, which is being tested in Madagascar, aims to develop an operational tool capable of processing strategic data for managing the risks associated with extreme weather events. Based on Sentinel-1 and 2 satellite images, a web interface will provide users with ex post indicators of natural disasters in order to quantify the damage and better manage the consequences of their occurrences.

The monitoring of wetlands has become a major strategic issue given their key role in biodiversity, climate change and hydrology. In this perspective, the EO4Wetlands project aims to provide a wetlands monitoring tool for French, Belgian and Dutch users. This service is made possible by the joint use of in situ data, drone overflights and high-resolution satellite data. The tool will allow the analysis of surface conditions and their spatio-temporal changes in order to support decision-makers concerned about the potential occurrence of extreme climatic events such as floods.

The GeoHaTACC project focuses on geo-hydrological hazards such as mass movements and flash floods, more specifically on the territory of Rwanda. Combined with other sources of information, satellite data can make a real contribution to the detection and analysis of the spatio-temporal evolution of such events. In a context of data scarcity, the objective is to provide tools to assess the effects of climate change on meteorological hazards on the wider scale of Central Africa. 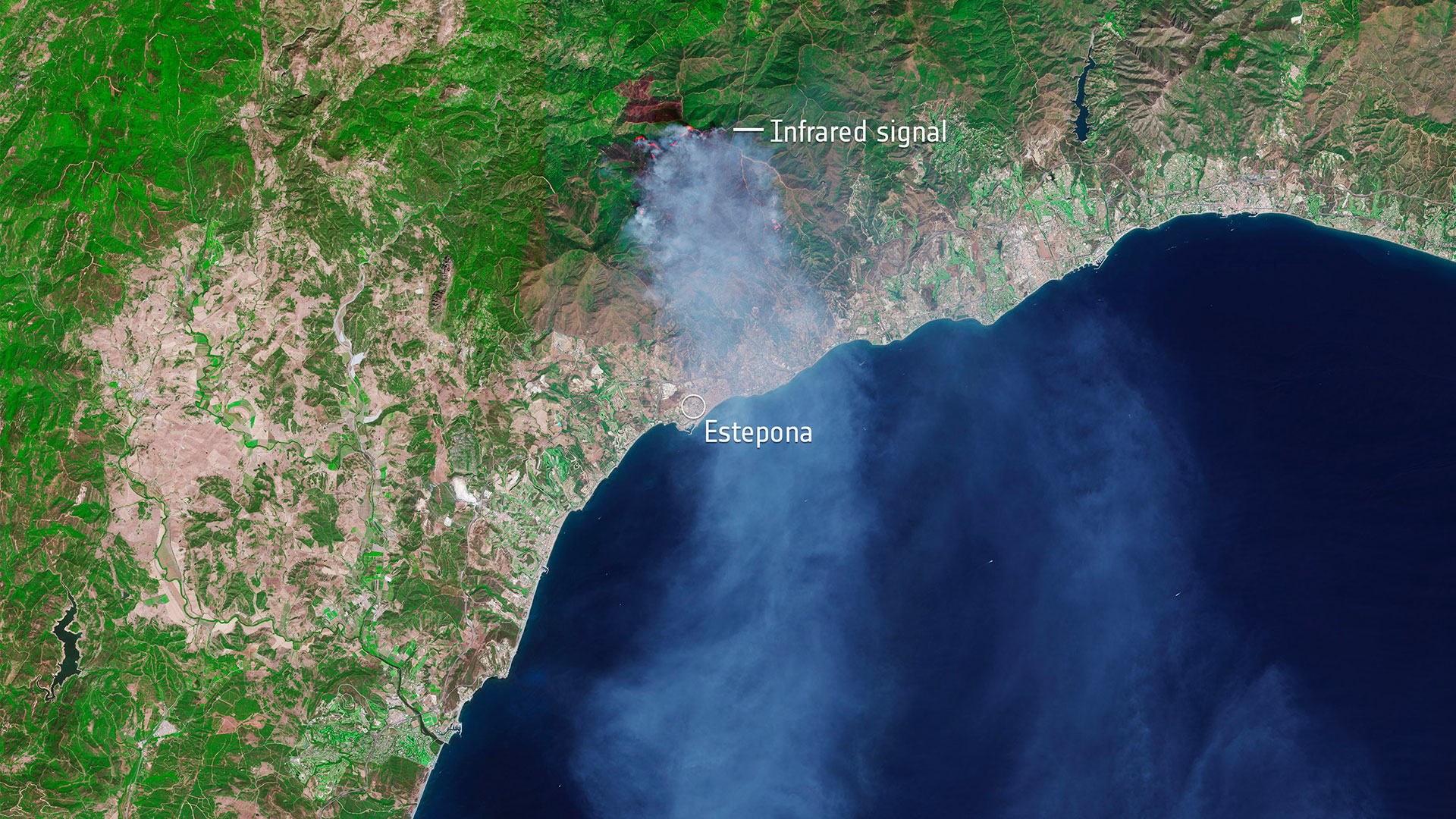